10 guerrilla attack town of Medina, forced to retreat with  no casualties 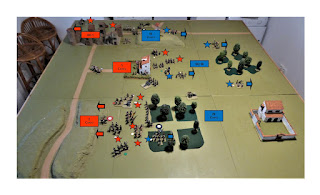 The French plan was to pin the centre and south, and attack Comillas in the north

He defeated the British covering force, but left it too late to take the town

In the centre 10th French corps defeated 1st  British corps, but were unable to take the farm

Despite having the advantage of attacking, the French have lost the first two battles of this campaign

The main attack was against the town, and the French had a mixed force of infantry, cavalry and artillery

The British has a smaller force of infantry and cavalry, including one Spanish brigade

It was necessary for the French artillery to weaken the enemy cavalry, and this took longer than expected

It was move 6 before they were able to advance to attack, and they did not have sufficient time to take the town

They were unable to take the farm, but they defeated the British troops outside

Their artillery were routed before they could even clear the woods

The game was very enjoyable, because the advantage kept moving from one side to the other

And right up to the last move either side could have won.

Despite this victory things are not looking good for the French

However the British were deployed to defend, and are having difficulties following up after winning the first  two battles