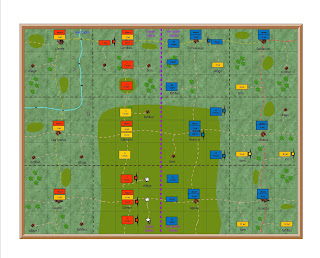 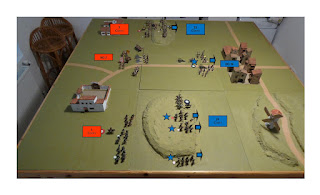 The French occupy a very strong defensive position between Aguilar and the Llanes-Santander district border.

Hill is aware that a frontal attack down the main road would lead to heavy casualties.   His plan is to attack the two hills, and only when one or both is taken will he attack in the centre.

Each French corps has its cavalry brigade under command, Hill has concentrated all of his cavalry in the centre.  So the infantry approach both hill in line, with one brigade on the flank in square.  They halt out of musket range, and send their skirmishers forward.   After a prolonged skirmish fight they eventually take both hills.   The French suffer more casualties on the southern hill, where 4th British corps has two rifle brigades

The French retreat and abandon Aguilar, leaving the British with a convincing victory

The French position was one that Wellington would have been proud of.   Two low hills either side of the main road, which would provide excellent cover from artillery fire.

However this was not a tactic which my French troops are particularly suited.   They have average skirmishers, good musket skills and are better suited to column attacks

The British, and particularly the two rifle brigades, have excellent skirmish skills.  But they are poor at volley fire and only average at hand to hand fighting

In addition the French have longer range guns, which give them an advantage over the smaller British guns.

It was clear to the French that one or both of the hills would have to be taken before the main attack could be made on the town.   However a considerable force would have to be allocated to hold the main road, otherwise the British could bypass the hills and go straight for Aguilar.   The French commander created a separate command of the artillery of both corps, supported by an elite infantry brigade from each corps.   The cavalry were left under the command of their respective corps commanders.

The British commander felt confident that his infantry could take the two hills.  He expected the French infantry to deploy behind the ridgeline, out of artillery range.   This would mean that he would be unable to use his guns to soften up the French.  But he was confident that he could win the skirmish battle, and inflict some casualties on the main battle line.   He would attack both hills at the same time, and attack in the centre only when one or both of them were taken.   For the attack in the centre he took command of the artillery and cavalry of both corps, plus an elite infantry brigade from each.

It came as a nasty surprise to find that the French cavalry were not deployed either side of the road, so they must be with the infantry behind the hill ridge.   This would make an attack in column very difficult.

He also found that the French 12 pounder guns could hit his own 6 pounder guns before they could get within range of the French gunners.  So softening up either the hills, or the centre, was no longer an option.

He ordered both corps to approach the hills in line, with a strong skirmish line in front.   The British cavalry in the centre would offer some protection, but one of the three brigades of each corps would also form square on the flank to protect the British lines.   As the British infantry approached, the French infantry moved to the front of the hill.   By this time the British guns were unable to fire on them due to their own infantry being too close.

So the battle would be decided by an extensive skirmish battle.

This went well on the northern hill, where the French infantry were shaken and retreated from the ridge.   The British infantry would have to form column to attack, and the two British brigades got bogged down in hand to hand fighting.   The Portuguese brigade, which had been in square against the French hussars, now formed column to attack the flank of the French infantry.  As they did so the French cavalry charged, but were unable to break the Portuguese.  Both brigades broke cover to regroup.

The battle was decided on the southern hill.    Here the British had two rifle brigades and one Portuguese cacadore brigade.   They also halted out of musket range and sent forward a strong skirmish line.   One French brigade was routed.   However one French brigade moved forward in column and charged the right hand rifle brigade.   The riflemen came off worse, and retired shaken.   The second rifle brigade formed column and attacked the winning French brigade, which was now disordered.   The British won the melee, but only just.   However it was enough to force the rest of the French corps to withdraw.

It is very unusual for skirmish fighting alone to win a battle in my rules.  This is because skirmish fire is very uncertain.   Each brigade rolls one D6, and needs a total of 6 for a hit.   Trained troops add plus 1, riflemen add plus 2.   When they fire we place smoke in front of the brigade, and it is only removed if they don’t fire again next time.  If they do it is minus 1 for a hit.   So even the elite riflemen need a dice throw of 5 or 6 to hit.   Trained skirmishers need a 6.   Poorly trained skirmishers can only fire on alternate moves.   So this is not a tactic you would normally use, and particularly if the enemy were supported by cavalry.    However as the British player I could not see any better option.

It is always easy to remember when one player rolls a 6, or a 1, at a critical part of the game.   It is more difficult to remember the balance of luck throughout the whole game.   I suspect that we both rolled good, and bad, dice.  But my good ones were at the critical point, and Jan’s bad ones were when she really needed a good one.    So I won the game.