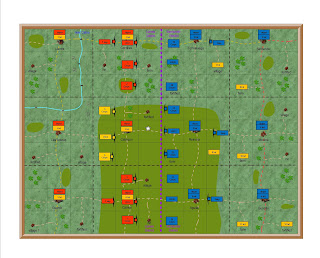 Wellington orders his army to advance to the border

But to avoid combat unless the French cross into Llanes district 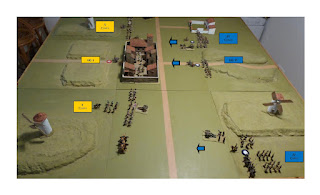 The French had to advance, in three columns, through the mountains to reach Cabezon.   This made coordination of the whole army very difficult.

The French commander created a reserve of two infantry brigades in the centre to attack the town.  However the Spanish garrison had been increased to three brigades.

The two corps kept their artillery, but were expected to support the attack on the town.  However they found it difficult to advance with the guns supporting their own columns.

As this is the opening battle of the campaign there are no previous battle casualties.   All brigades are therefore full strength, and morale does not play such an important role.

Two things decided the outcome of this battle.

First was that the French would have to approach through the mountains.  This, combined with the campaign rule that there can only be one command in each map/wargame square, made it very difficult to coordinate the three columns.

Second was that the Spanish had 12 pounder guns, the French 9 pounder.   So the French could fire further than the French.   This allowed them to deploy to cover the mouth of the three valleys and engage the French before they could deploy.   The Spanish gunners were not as well trained as the French, but the longer range more than made up for that disadvantage.

In this game the Spanish actually outnumbered the attacking French.  This is because they had a militia brigade in garrison.  In addition the garrison was increased to three brigades, and the French had only allowed two brigades to take it.  So the attacking column would have to rely on artillery support from the two corps either side of them.

Being pinned at the entrance to the valleys the French artillery had to first engage the Spanish corps opposite, only then could they afford to concentrate on the town garrison.    This all proved too difficult, and the French gunners could not pull it off.   The garrison did eventually suffer casualties, but it was too little and too late.

At nightfall the Spanish still held the town, and therefore won the battle/wargame.

You will see from the map that there is a lot of hill ground either side of the border, so this is a problem which the attacking player will encounter again and will have to be solved.   Fortunately I usually command the attacking army, and Jan the defending one.   So I will have to come up with some solution.