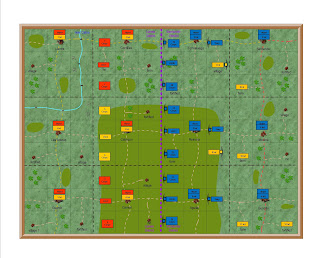 The whole French army advance to the border

The French also start to move supplies to the forward depots

The French advance has taken Wellington by surprise

The Anglo-Portuguese corps are still in their garrison locations

Already supplies are being moved to the forward depots

The French movement has also disrupted the Spanish guerrilla bands

The three rear depots are now vulnerable to guerrilla attack

The yellow markers are Spanish troops, both regular and guerrilla

You will note that there are six allied corps, four British and two Spanish

The two Spanish corps are in the centre, with British support on both flanks

However this is no longer the case, these two are the elite of the Spanish army

But they are the equal of the Portuguese infantry

There have been changes in the morale, firing and skirmish ability of all brigades

Generally all have been made slightly better, to avoid too many routs too easily

But the Spanish in particular have gained from this reassessment