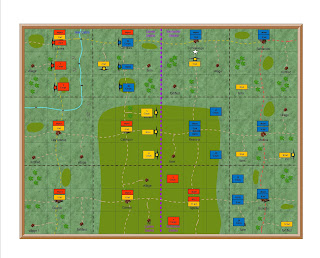 Soult is concerned about guerrilla activity against his lines of supply

He is also concerned how widely dispersed his three armies are

Wellington is also concerned how dispersed are his three armies

1st army has to retreat to Llanes

After four days of fighting both armies are widely dispersed and unsupported.

In the north 1st British army has been forced to retreat to Llanes.

10th French army have pursued them and are at Comillas

They have a chance to take Llanes, which is the campaign objective

But to do so  they have to attack over a defended river line.

However their lines of supply to Medina is secure

They occupy a strong position and their flanks are secure

Their lines of supply to Medina are also secure

Their northern flank is exposed to 11th French army

Their lines of supply are overextended.

Both commanders are aware that they must concentrate their armies

However neither want to retreat.

If Wellington orders 2nd army to retreat to Camon he can secure his flanks.

He can then concentrate on driving 10th French army back over the Llanes-Santander border.

Soult is in a more difficult position.   His strength is in the centre and south, where 11th and 12th armies support each other

However his real advantage is in the north, where the capture of Llanes would give him the campaign objective.

10th corps have long supply lines, open to attack by the guerrillas

And a defeat at Llanes would put 10th army in real danger of being cut off and forced to surrender.

If the French could take Cabezon they would be in a strong position to win the campaign.   However their lines of supply would then be more open to attack.

If the Spanish could take Reinosa Wellington could move the centre of operations into Santander district.   This is clearly his intention, because he has moved the Spanish forward to the border, placing them within attacking range of Reinosa.

This has been one of the most complicated campaign phases for a long time.

Caused mainly by the lack of French success and their inability to move into Llanes district.

Day 6 should bring another battle, either for Cabezon or Reinosa.

And the result will have a dramatic effect on the outcome of the campaign.