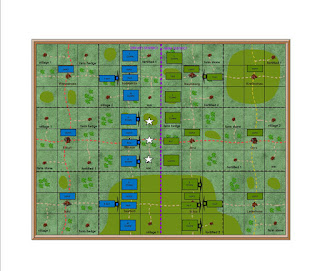 The campaign is not going well for the French

They had anticipated that by now they would have taken the three border towns of Naumburg, Jena and Sulza.

All three are still held by the Russians.

In the north both armies regroup and resupply

In the south the Russians retreat to Sulza. 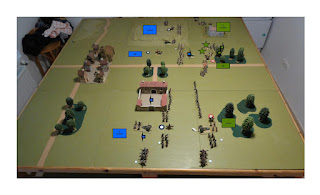 The battle is fought to the west of Jena.

The French advance in three columns

In the south 6th French corps

The battle opens with an exchange of artillery fire, which causes little damage

2nd corps occupy the northern hill, but do not attack

6th corps attack in the south, but are unable to break 1st Russian corps

At midday the French infantry advance, and rout the shaken Russian gunners

Having broken the Russian centre the French artillery redeploy to support 2nd corps.

Before they can attack the Russian army retreats.

The French claim victory, but the Russians are not defeated

The Russians have lost 3 infantry, 1 cavalry and 2 artillery casualties (1500 men)

Marshal Davout is well aware how critical this battle would be.

Each army has won one battle so far in the campaign

After four rounds of artillery fire little damage had been done

He advanced his infantry on the high ground, out of sight of the Russian guns

Their cavalry advanced in the valley to cover their flank

Neither had managed to gain artillery superiority

Their cavalry charged the Russian Cossacks, expecting a quick victory

However they lost the cavalry melee and had to retreat shaken

Although the Russians retired, they did so in good order and still holding Jena