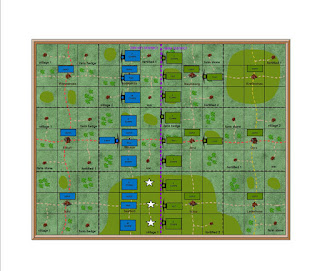 Having won the battle of Naumburg, the whole Russian army moves forward to the border.

In the south Third army cross the border and launch a surprise attacks on Saalfeld.

After a hard fought battle the French hold the town 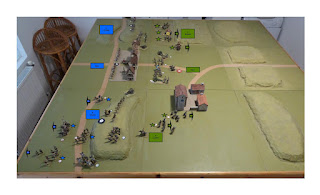 The Russians have to advance through the hills to reach Saalfeld.   This results in a slow deployment, except for the reserve artillery who use the only available road to deploy first.

The French are deployed on the hills either side of the town, and happy to wait for the Russian attack.  The reserve artillery remain behind the town to avoid the Russian artillery deployed in front of Saalfeld.

In the north, 8th French corps has to advance into the plain, to disrupt the Russian reserve.   5th Russian corps attack, but are driven back with heavy casualties

In the south the Russians remain behind the crest of the hill.   6th Russian corps attack, and have more success than in the north.  But at nightfall the hill is still disputed.

It is interesting how the campaign takes on a life of its own.   The intention of this campaign phase was that the French would move east into Gera district, with the objective to taking Gera itself.

This would mean that the initial fighting would take place at Naumburg, Jena and Sulza.   However the Russian victory at Naumburg dictated that the Russians should take the initiative and march into Erfurt district.

So this battle, even though it was very early in the campaign phase, was critical.   If the Russians won at Saalfeld it would be extremely difficult for the French to hold the line of the border.  They would have to retreat to Wissensee, Erfurt and Suhl.

The latest winning tactic is for the attacker to create a very strong reserve, usually infantry and artillery, under the command of the Army commander.   The defender has to defend the whole front, leaving the point of attack to the attacker.   Using the reserve the attacking general can choose which of the two wings to support, giving them a high likehood of winning.

The counter is for the defender to do the same.   The game objective is always the town, so the defender must use his reverse to hold it.  By putting his infantry into the town, he presents an excellet target to the attacker.   He can move his artillery into close range of the town, batter the garrison and then attack with his reserve infantry when they have received sufficient casualties.

In this game the French defender (Jan) found a winning counter to this tactic.   She created a reserve of two elite infantry brigades.  But they were placed behind the town, not inside it.   The two corps either side of the town deployed their artillery close to the town, providing long range support.

As the Russian reserve advanced they came under fire from the French artillery.   There was no one in the town, and the enemy infantry was behind the crest of the hills on either side.  So the Russian artillery had no targets, other than the difficult to hit French gunners.   However Russian infantry had to be close enough to support the reserve artillery, and therefore were within range of the Russian gunners.  They suffered heavy casualties, and were too weak to attack the town.

This simple tactic won the game for the French.   And it presented a very effective to the previous battle winning attacker reserve.   It will be interesting to see if we can come up with a counter to the counter!