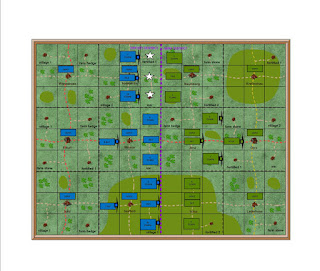 The campaign is going badly for the French

By now they should be in position to attack Gera

But they are still west of the border

However to move into Gera district they must take Naumburg

In the north French army attack Russians west of Naumburg

In the centre French regroup, Russians retreat behind Jena 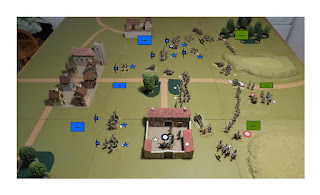 Both armies start the battle with considerable casualties from previous battles.

He orders both corps to move to the centre and support the main attack.

The reserve artillery is routed by the Russian gunners

The right retreat into the woods, the centre to the valley between the two hills

The Russian gunners concentrate on the French cavalry, and rout both

This spreads to two infantry brigades, and 5th corps artillery

Without cavalry or artillery support the French infantry must withdraw

After four battles both armies have suffered considerable casualties.

Even with reinforcements most brigades have at least 10% casualties

This would have a significant effect on this battle.

He ordered a redeployment towards the centre, where the reserve would spearhead the attack.

Obviously the Russians reacted with their own redeployment

Their left wing retreated to the woods, their right moved down from the southern hill to extend the centre

The battle was decided with relatively few French casualties

The Russian gunners were lucky with their dice, and hit the Westphalian artillery and French cavalry

Both failed their morale due to battle casualties, both broke and routed

Both routs spread to nearby brigades, who already had battle casualties

Only one infantry melee took place, when the Russian infantry stormed the inn in the centre

They won, but it had little effect on the outcome of the battle

This battle could have gone either way, the Russians were luckier on the day

The French really needed to win this battle, and the outlook is now bleak for them