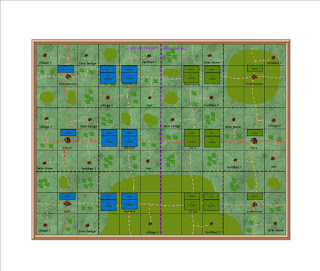 Both armies are deployed as close to the border as possible.   There must always be at least one empty square between the two sides.   If one side moves into that square then a battle is declared and a wargame set up.

Once more there are six corps per side, organised in three armies per side, each consisting of two corps.

Each army has an operational area three squares deep by twelve squares wide.   This is divided into four squares each three by three squares.  This one days march in the campaign, it is also the size of a wargames table.   There is one town in each area, providing an objective for each campaign day.

The initial deployment is to allow both armies to get as close to the border as possible, whilst still having each corps within supply range of a depot.

To resupply a corps must be within three squares of a depot.   Each side has six towns/depots.

As always supply will play a vital role is this campaign.   Each depot will provide one days supply per day.   Each corps will use one days supply per day.   In this deployment both sides can resupply all six of their corps each day.   However when one side moves forward they will immediately be out of supply range of the rear town on each side.   This will require each of those town to start forwarding supplies to the forward depot.   Each army can move a maximum of two days supplies up to three squares each day.

Unlike Spain, there are no guerrilla bands to interrupt the supply system.   However when a town is taken the supplies within that town fall to the winner.   This makes their supply easier, and the loser much more difficult.