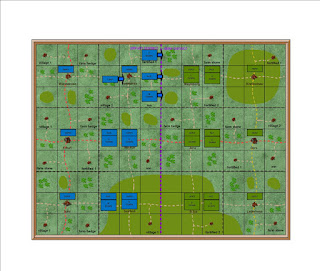 In the north 5th French army advance and deploy on the border.

The remainder of the French corps hold and resupply

The Russian army are unaware of the move, and also resupply

The initiative lies with the French, who are the aggressors.   They take advantage by stealing a march on the Russians.  By nightfall they are in position to attack Naumburg at first light.

In doing so they have moved out of supply range of Wiessensee, who has sent forward one days supplies to Sommerda.

The remainder of the French army remain in their current locations and resupply.   There is no point in moving out of supply range of their rear depots, unless they are prepared to immediately attack.

The Russians also remain in their current locations, and also resupply.  They are not aware until late nightfall that the French have advanced towards Naumburg.

No battle has been declared because there is still at least one square between all of the French and Russian corps.