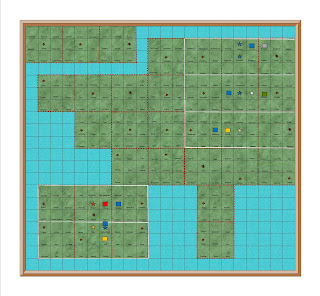 The next phase of the 1813 campaign is set in central Germany.

It will be the 81st phase since the campaign started in April 2009, and the 8th phase in the sixth revision which started in June 2020.   This map shows the location of those six phases, the colour of the star indicates which side won that phase.   Gera is shown with a white star.

This is the second phase in central Germany.  The French won the first phase by taking Erfurt and forcing the Russians to retreat to Gera.   This phase will cover the French invasion of Gera, and the Russian attempt to hold and defeat them. 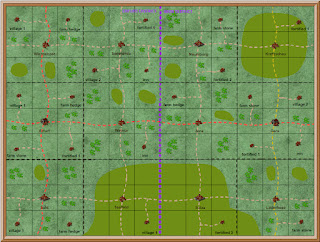 It covers the area between Erfurt and Gera

The district border is in the middle of the map

Each square is a 2x2 foot scenic square.

Nine squares is a wargames table.

This map is used for tactical (daily) movement

The Russian objective is to defeat the French and hold Gera

This campaign will continue the revised orbat of six corps per side which was introduced for the previous Cuidad Real phase.

The campaign area is relatively open, and there are no rivers.   There are only two mountain areas, which should allow for more open battles/wargames.