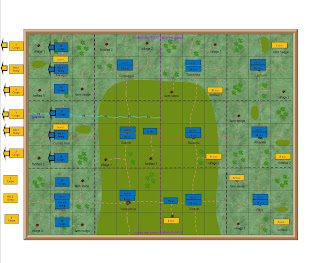 Despite the Spanish victory at Cuidad Real, it was obvious to general Giron that he was now in an impossible situation.   The loss of 3rd Army meant that he was outnumbered two to one by the French.   Any delay would allow the French to concentrate four corps against two at Cuidad Real.   Consequently he ordered 1st and 2nd Spanish armies to retreat and abandon both Cuidad Real and Malagon.

Marshal Suchet wanted to destroy the Spanish army before they could retreat and escape.   Despite a shortage of supplies he ordered all three French armies to engage the Spanish.   14th and 15th armies would attack Cuidad Real.   13th French army would attack Malagon.

The retreat of the Spanish army prevented any further engagements.   The French occupied both towns with out any resistance.

Suchet had failed to destroy the Spanish army, but he did occupy all of the Spanish towns, including Cuidad Real.   He therefore won the campaign.

The battle of Cuidad Real should have been the deciding one of the campaign. This city was the campaign objective of both sides.

After nine days, and nine battles, both sides were at the end of their operational capacity.    Both had received considerable battle casualties.   Both were very short of supplies.

In normal circumstances the French should have lost the campaign when they lost the battle of Cuidad Real.   Although they had won five of the nine battles fought, their over extended lines of supply would have forced them to retreat to consolidate their depots.

Because of effective guerrilla activity the French had to detach more than half of their cavalry to protect their lines of supply.   This left the field armies at a distinct disadvantage.   The Spanish already outnumbered them in infantry, now they also outnumbered them in cavalry.  Without effective cavalry the French were unable to overcome their lack of infantry.   This resulted in more defeats than would be normal in Spain.

For the final battles the French had recalled about half of the detached cavalry.   It was a risk, because it would have an immediate effect on their supply system.   If they could quickly defeat the Spanish armies they would be able to live off the captured Spanish supplies.   But they would have to defeat three Spanish armies one after the other.

The reason is the location of the Spanish armies for this final phase of the campaign.   They had already been forced to retreat from the central battles of Consuegra, Damiel and Valdepenas.   They were at the extreme left of the map for the final three battles.   The campaign rules are that if a corps retreats off the map they have left the campaign, and cannot enter again.   The Spanish defeat at Almagro meant that 1st Spanish army had to retreat off the map, and thus leave the campaign.

Not surprising that Giron ordered 1st and 2nd Spanish armies to retreat before the French could destroy them both in two battles.

This is why I so prefer campaigns rather than one off battles.    The outcome of the campaign is not decided by the side who kills the most enemy.   Nor is it only decided by who wins the most  battles.   There are strategic objectives which are just as important as winning battles.   One is supply and another the location of the battles.

It is possible, though unlikely, that one side could win more battles than the other and still lose.  For example the French could lose the advantage in the centre (14th French army) and south (15th French army) but still win if 13th French army forced 2nd Spanish army to retreat off the map in the north.

In this campaign the French won more battles, but they were held in check in the centre and north.  It was only the retreat of 3rd Spanish army in the south which gave them the campaign.

I think that the French deserved to win (but then I did command them).    They were outnumbered throughout the campaign, and they had increasing supply problems as they drove the Spanish back.   They also lost critical battles, though never suffered a crushing defeat.   If the Spanish had forced a draw at Almagro they, and not the French, would have won the campaign.

A very, very enjoyable campaign to play, and a good illustration of why Spain is fast becoming my favourite of the five campaign areas in the 1813 campaign.

Having been away for nearly a fortnight, I’ve only just managed to catch up with your campaign.

I’m not surprised that the French finally prevailed, but the Spanish certainly made them fight hard to do do so … and the Spanish guerrillas certainly caused the French serious problems at times. The fact that a major part of the French cavalry had to be detached to protect their supply lines showed how effective the guerrillas could be. It’s given me something to think about for my Russian campaign … when I get a chance to resurrect that project.

Nice to hear from you, and I hope you are feeling a little better.

I think the irregular attacks on supply lines would work just as well in Russia 1812, and would not even need much adjusting to the rules.