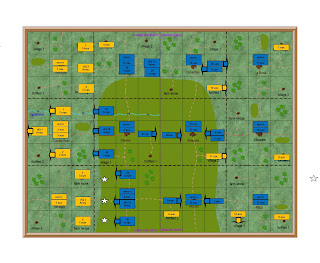 Despite the loss of half of their cavalry, 15th French army are ordered to attack Almagro. 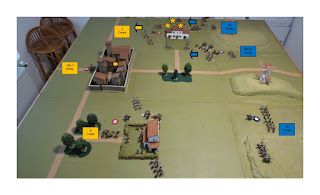 Battle of Almagro end of move 6

3rd Spanish army occupy a strong position in front of Almagro.   They also outnumber the French in infantry brigades.   To mount an attack the French must first move through the mountains.

But it takes all morning, and there is not enough time left to redeploy and attack the town.   However the French have forced one Spanish corps to retreat, and are now clear of the mountains.

Despite their continued success the French are finding it difficult to inflict a decisive defeat on the Spanish.   The loss of so much of their cavalry to secure their lines of supply has put the French field army at a disadvantage.

The Spanish have more infantry and the same quantity of artillery.  The only French advantage is in cavalry.   To avoid unacceptable casualties the French must pin one of the Spanish flanks and attack the other with all of their artillery.

The redeployed cavalry have at least secured the lines of supply.   There has been no guerrilla activity all day, and supplies are being moved forward to support the main field army.