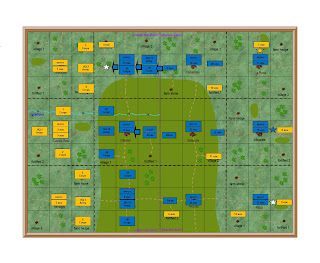 The French cavalry are securing the supply routes from Tomelloso, Balzote and Alcaraz to the front line.  But guerrilla activity continues against the rear depots of La Roda, Albacete and Pozo.   At La Roda they rout the garrison and capture the town together with one day’s supplies.

Marshal Soult is aware that he must bring this campaign to a quick result, or risk losing his complicated lines of supply.   However all three of his armies are over extended, in need of supply and have lost most of their cavalry to patrol the lines of supply.  The longer the French delay, the stronger the Spanish become.

The least affected of his three armies is 13th in the north at Consuegra.   The infantry and artillery are relatively intact, but his best cavalry brigade is detached to secure his lines of supply.   His second brigade has 20% casualties.   Despite this he is ordered to attack Malagon.

2nd Spanish army is tasked with the defence of Malagon.   They occupy a strong position just east of the town.   They also outnumber the French in infantry and even cavalry, and have a similar number of guns. 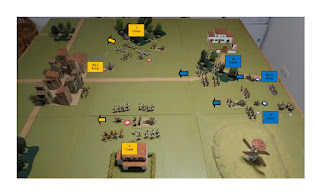 Battle of Malagon end of move 6

26th Polish corps is in position to attack, but 25th French corps is further west to remain closer to the rear depots and help secure supply convoys.   They will not arrive until midday.

3rd Spanish corps deploy close to the exits from the hills, to engage the French as they move into the plain.    This unexpected deployment forces the Poles to halt and deploy immediately they spot the Spanish.   The Polish cavalry brigade is detached to patrol the supply lines, so they have no answer to the full strength Spanish dragoon brigade.

The Poles use the woods for cover to deploy.  They send their artillery forward to force the guerrilla band out of the walled farm, and they then engage the Spanish cavalry.   The cavalry withdraw, but not before they receive 10% casualties.   The guerrilla also retreat, but receive 20% casualties from the French gunners.

There is no room for the Spanish to attack, so they just fire on the French gunners.   This continues until 25th French corps start to arrive.

With the arrival of 25th corps, General Morillo can see that his plan to engage the head of the French column has failed.  He immediately orders both of his corps to fall back to Malagon.

I was not expecting Jan to use this unusual Spanish tactic of moving forward to attack the head of the French column.    This forced the Polish corps to deploy right on the edge of the table.   Here they were protected by a large woods, but were close to a guerrilla occupied walled farm.   Any advance would expose them to fire from the farm, a much larger corps to their front, and a second Spanish corps within supporting distance.

The Polish artillery unlimbered on the table edge, within short range of the farm.   Their first rounds caused the guerrilla band 10% casualties.  They immediately started to withdraw, but lost another 10% before they could do so.

On move five the French corps started to arrive.   Jan immediately started to withdraw both of her corps towards the town.  However before the Spanish cavalry could retreat the Polish gunners caused them 10% casualties.

Although there were six moves left before nightfall, it was too late for the French to catch the retreating Spanish and attack them.   They would run the risk of casualties from the redeployed Spanish artillery, and would then have to retreat during darkness to recreate the required 24” gap required for a new battle next morning.

A second day of battle would be required to decide the fate of Malagon.   During darkness both armies could redeploy as they wished, providing that they did not enter the centre 24” no man’s land.

However the die was now cast.   A French retreat was out of the question.  Whatever the outcome a second battle would be fought at Malagon.

Despite the apparent lack of activity this was a surprisingly interesting game for me as Polish commander.   My main aim was to damage the Spanish cavalry, as they would dominate the second day otherwise.   It was pure luck that I managed to do so on the last move of the game.

I suspect that I will lose the second battle of Malagon, but I am really looking forward to gaming it.