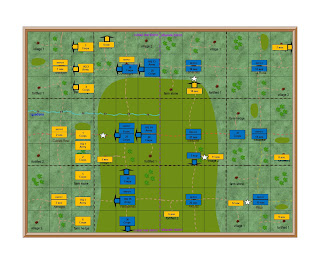 They also ambush and capture a convoy of three days supplies 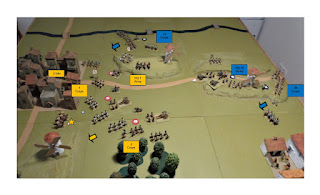 The Spanish deploy their artillery to cover the exit from the pass.  Any attempt to do so must result in heavy French casualties.

27th French corps leads the French column.  They turn right and climb the hill into the northern valley.   They then move towards the city.   The Spanish reserve of one cavalry and two infantry brigades occupy the hill.

Meanwhile the French reserve of both artillery batteries and two infantry brigades move through the pass.   The leading battery deploys at the mouth of the pass, the second battery deploys on top of the southern hill.

28th Italian corps turn left and cross the hills into the southern valley.  However this takes them the rest of the day.

As soon as the French clear the pass the Spanish commander orders 1st and 2nd corps to withdraw to the city and the woods.   His reserve continue to hold the hill facing the river to cover this withdrawal.

There is only one combat in the whole day.   2nd Spanish lancers charge the leading French battery as they deploy at the exit from the pass.   The gunners fire at close range (two “sixes”) and rout the Spanish cavalry.

The Spanish claim a victory because they hold the city at nightfall.

This was an unusual wargame.

The Spanish outnumbered the French in infantry.  They also occupied an excellent defensive position in front of the city.   They deployed well forward, so that their artillery could cover the western exit from the pass.

Any attempt by the French to march through the pass would result in heavy casualties.  The head of the column would come under fire from both Spanish batteries.

It was decided to move the leading French corps over the hills on the north of the pass, and the second French corps the hills on the south.  A reserve of both French batteries would move through the pass, supported by two infantry brigades.   The leading battery would open fire as soon as they reached the exit.  The second battery would deploy on the southern hill.  They would engage the enemy whilst the two corps advanced either side of the pass.

The Spanish cavalry charged the leading French battery as they deployed at the mouth of the pass.  Had they charged home the French gunners would have routed back into the pass, disrupting the long column behind them.     This would have given the Spanish a real victory.

However the Spanish cavalry were routed, due to an exception dice throw.   2D6 were thrown to decide how effective the French artillery were.   Both came up six!

Despite this set back the French are doing extremely well in the set piece battles.  However their rear areas are under constant attack by the Spanish guerrillas.   And the loss of a convoy with sufficient supplies for three corps is a major loss.

Just back from a cruise to Spain and Portugal, so I’ve only just managed to catch up with events. (The weather was very variable during our cruise. Great weather in Vigo, brilliant sunshine in Lisbon, a bit windy but warm in Cartagena … but we missed Malaga and Gibraltar due to heavy seas and high winds. Managed to get into Cadiz, which was very pleasant.)

The French seem to be striving to win a decisive victory, but the Spanish seem to be conducting matters in a way that maximises their strengths and minimises their weaknesses. I look forward to seeing what happens next.

Nice to hear from you again.

I read the initial report about your cruise on your blog, and am looking forward to the detailed account. We have had pretty miserable weather here in Spain for the past couple of weeks. As always the rain is short lived, but heavy if you get caught in it. We had to cancel a planned walk with our walking group last Monday because of heavy rain. It happens each year, but usually only two or three times.

I am pleased with the current campaign in Spain. At last I seem to have gotten the balance right between the French and Spanish. I usually command the French, and find that I have to work much harder to win a game. The Spanish are always stronger, but more brittle. So the French have to concentrate and cause a couple of artillery casualties before attacking with the infantry. They need at least 8 with 2D6, so often do not achieve their goal. If they delay the attack too long they run out of time, and the game ends in a draw. This has happened quite a lot in this campaign. It makes for interesting wargames, and I am enjoying the campaign a lot.

The outcome is still very uncertain.