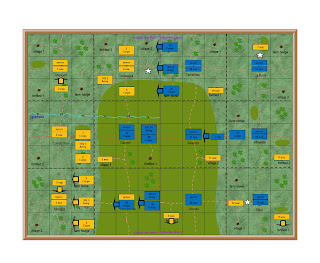 Spanish guerrilla continue to attack the French rear area, but are not having much success.   La Roda and Pozo come under attack again, but by different bands.   One is routed at La Roda with 30% casualties, the other is a draw and both sides lose 10% casualties. 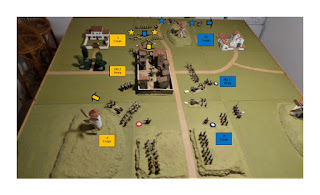 Battle of Consuegra end of move 10

The Spanish occupy a walled town in the hilly region north of the river Guadiana.   The town is held by two infantry brigades, with the rest of the army deployed in and behind the nearby hills.

Taking such a position is a difficult task for 13th French army.   Once more the artillery of both corps, plus two elite infantry brigades, are concentrated under the command of the army commander.

Each corps pins one flank, whilst the reserve moves into close artillery range of the town.   The aim is to reduce the garrison, and then attack with both infantry brigades.  Unfortunately the artillery fail to do much damage, and the garrison still hold at nightfall.

However they only do so by withdrawing their army behind the cover of the town.  The Spanish commander is aware that he could not fight a second day in such circumstances.  He orders his army to retreat under cover of darkness.

A third victory for the French, even though the Spanish still held the town at nightfall.  However it was a very costly one, particularly for the French cavalry.   The French have now achieved their initial objectives, but have failed to destroy the Spanish army.  And the French lines of communication are now under constant attack from guerrilla bands.

In all three battles the Spanish have managed to hold their town, usually by withdrawing their flanks as the French advance.   In the last two battles the very hilly terrain greatly favoured these Spanish tactics.   The French have had to use their cavalry against the Spanish gunners, and this has proved very costly.

The Spanish are now concentrated around the towns of Malagon, Cuidad Real and Almagro.   In this position they are easily supplied from the main depot at Cuidad Real.

The French must now regroup and garrison the captured towns of Consuegra, Damiel and Valdepnas.   Before they can advance further west they must build up these new depots, resupply their corps and replace their battle casualties.   Meanwhile their rear area of La Roda, Albacete and Pozo are open to constant attack from the many guerrilla bands.

The longer the French delay the more their lines of supply come under attack, with the very real risk that they may have to send back infantry from the field army to support the depot garrisons.   Each day that they delay they must bring forward sufficient supplies to feed the six corps of the field army.

The French commander is well aware that if he is to win this campaign he must find a balance between building up his weakened army, and risk running out of supplies.