How difficult is it to sell model soldiers 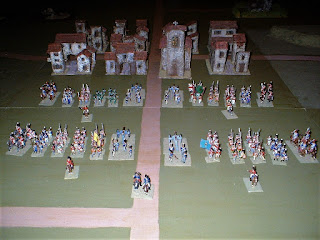 When I reorganised my model soldier collection many years ago, I did so in 28mm and 18mm.   My aim was to fight the larger battles in 18mm and the smaller ones in 28mm.   I soon realised that I preferred to use the 28mm, and the 18mm have sat on their shelf ever since.   Unused, but not really unloved.

Over the years I have considered attempting to sell them, but I have always been put off by the sheer size of the problem.   To make matters worse I live in Spain, so postage would be an additional problem.

So I have just put it off, and feel guilty about the sheer waste of it all. 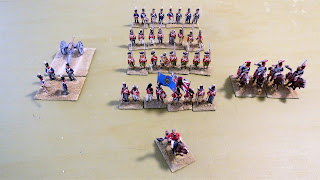 The figures are all AB miniatures.   I have had little experience of mixing with other wargamers, so I have no idea what sort of painting standard they are.  But the photos should give some indication.

They include most of the nations of the Napoleonic Wars.   There are Austrian, British, Prussian, Russian and Spanish armies.   There are also four French armies, including most of the French allies such as Bavarian, Polish, Westphalian and Italian

They were bought as groups of 16 infantry, 8 cavalry and 1 gun with 4 crew.   However they are based for use with my 1813 campaign.  Each army has four corps.   Each corps has four infantry brigades of 8 figures, one cavalry brigade of 4 figures and one gun with 4 crew.  In addition there are a collection of skirmish figures and odds and ends such as an ambulance crew.   There are also about 100 home made buildings based on stands of 4, and a similar number of paper buildings also on stands. 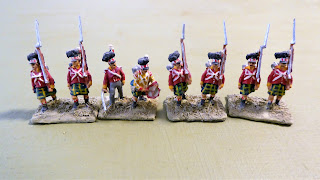 The purpose of this blog is to ask if any of you can give me any advice about the best way of selling them.   I have not sold any figures for about 20 years, and I am not even sure if there is any market out there for them.

But I would like to find a good home for them where they will be appreciated and used as they are supposed to be, and not just sit on a shelf collecting dust.

Any advice you can give would be much appreciated.   Either as a comment on the blog, or better still an email to paulleniston@hotmail.com

I don't know about 18mm but there is a regular flow of used, painted 1/72 figures on eBay. However the lots rarely exceed 50 figures, perhaps to keep down the cost of each single purchase and so widen the number of potential buyers.
I haven't seen many entire armies being offered there.

I also bought one blogger's ECW collection after he advertised on his blog that he was selling, but he asked a tiny fraction of the models's value - the postage from Hungary cost more than the figures.

As you will know I paint and sell figures all the time in addition to commission work so can tell you that is most definitely a good market for painted 18mm figures and especially Napoleonic AB's! Bare metal price alone these days is 65p for foot and £1.35 mounted, that's before you touch them with a brush. I think you are on Facebook, if so then there is a Napoleonic Wargamers group which is very active with huge membership and does allow figures to be advertised for sale, that could be a good starting point. bear with me and I will email you later today with a bit more detail based on my experience in selling painted soldiers.

There are several ways.
(1) eBay. Just don't ask too much
(2) If you are a member of a forum such as TMP or LAF they have sections for items to sale.
I think you are on TMP if memory serves me well.
(3) At a wargames show in the bring and buy
(4) Through a magazine in the articles for sale.
(4) To one of the buyers who advertise buying part or whole collections. Like Hinds Figures.

I have bought and sold some figures online and the experience has generally been quite positive. Advertising on the wargames websites seems to work okay, as does eBay. For the latter, splitting into the smallest portions you can deal with seems to maximize return at the cost of more hassle for you e.g. selling a Spanish Army is a lot less bother than listing every individual Spanish unit, but will probably net you less overall.

P&P can be an issue from Eurpoe although if you are selling them in relatively big chunks rather than by the unit, I don't imagine it will be *that* bad. If you are selling by EBay, you could always sell them during your winter UK visit.

I have not sold any figures for about 15 years, and the prospect is pretty daunting. As I explained in my last post my main motivation is to pass them on to someone who will use them, rather than leave them on the shelf collecting dust. I would rather sell them as a collection, but appreciate that may well be very hard to do. I will have a look at Hinds Miniatures, but am not sure I want someone else to make a big profit on the deal.

EBay is attractive, though I will have to research what is the current price. But it would get a large audience, and it is what I used last time I sold figures. I am a member of TMP, but did not realise you could offer figures for sale on there. I live in Spain, so local shows are not an option. And I have not read a wargames magazine for many years (too many good options online).

Thanks for your comment. I know that you paint figures for friends, and that you have sold at wide selection of scales and periods. I did consider asking you for advice, but was not sure how that would be received. It is good to hear that there is a good marked for Napoleonic ABs. Although they were bought some years ago, they are in mint condition and hardly used. Could you give me a link for the Napoleonic Wargamers group that allows figures to be advertised for sale? I would very much appreciate your offer of an email and advice.

I take your point about postage from Europe, especially now that he UK has left the EU. I will have to investigate the options, and particularly the cost of insurance. Difficult to do until I have decided whether to break the collection up or not, and the weight of each package.

I know that it is a bit of an off the wall suggestion, but might a Spanish-based collector be interested in them … or someone like the museum in Valencia? (https://www.visitvalencia.com/en/what-to-do-valencia/valencian-culture/museum-in-valencia/liber-tin-soldier-museum)

If I had the space and the money, I’d certainly buy your collection from you, but as I already have a large 25/28mm Napoleonic collection that I’m not using at the moment, it would be a waste.

Finding a Spanish based buyer would be the ideal answer. But despite living in Spain I don't have any wargame contacts here. When we first arrived I went to some pains to contact local wargamers, but could only find a couple of ex pats. As you know Jan and I wargame the campaign together, so there is little outside influence.

I don't really think my poor collection would be of any interest to a museum, flattering as your suggestion is. And I would really prefer it to go to someone who will actually wargame with them.

I have had some really interesting and constructive replies, and I hope that this subject may prove of interest to other gamers who have figures they would like to pass on, but are not sure the best way to do so.