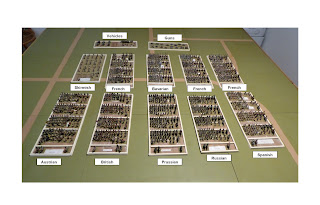 First thanks to everyone who has replied with advice and suggestions, both on the blog and by email.   All of it has been constructive and helpful, and I have been very pleased that so many of you have taken the trouble to do so.

I replied to all of the email immediately, but I was not aware that there were also comments on the blog.   Usually I get an email where there are comments, but not on this subject.  I only found them when I logged in today.   So sorry it has taken so long, and thanks for your suggestions.

I am still uncertain how best to proceed.  But clearly the first step is to take some photographs.    On this post is my first attempt.   Clearly these photos do not show sufficient details, and I am in the process of taking more close up ones.  I have been doing so all week, and have almost completed the task.

One of the suggestions was to advertise them on the blog in the hope that I might find a buyer.   That would be nice, but I am not really expecting it to be that easy!   But it would be useful to have them all on here as a reference so that I can direct any future prospective buyers to see the whole collection in detail. 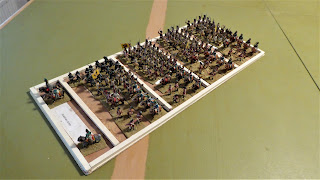 All of these photos show the figures grouped for use with my 1813 campaign.  They are, more or less, a duplicate of the 28mm figures that I now use.   There are four corps and a commander in chief and ADC.   Each corps has a general, gun crew of 4 figures, 4 cavalry figures and four infantry brigades of 8 figures each 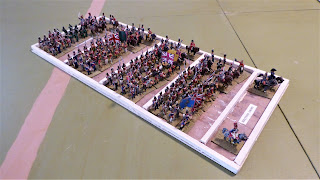 Same organisation as above, each corps has three British infantry brigades and one Portuguese 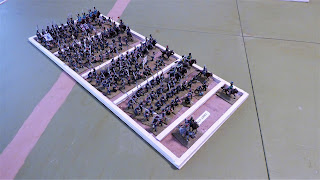 Same organisation.   The infantry include line, reserve and landwehr infantry. 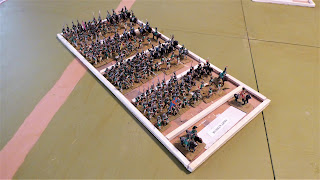 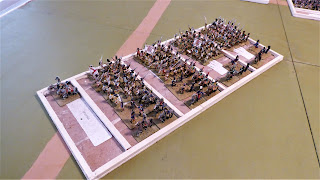 Slightly different organisation.   Two corps have the same as above, but other two only have three infantry brigades and no cavalry.   I wanted the Spanish to have less cavalry.   I also wanted them to have guerrilla bands, but could not find suitable figures when I painted them. 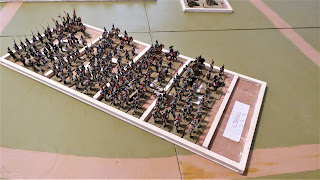 Same organisation as the allied army.   But this army has most of the Imperial Garde.  The first corps is the Old Guard grenadiers.  The second corps the Young Guard tirailleurs.   The third corps Young Guard voltiguers.   The fourth corps are Polish. 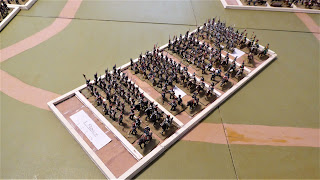 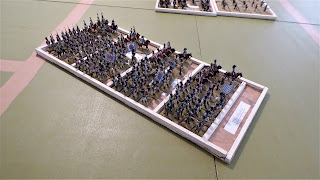 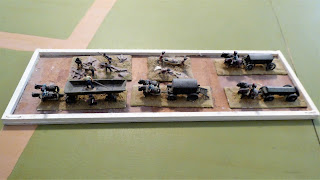 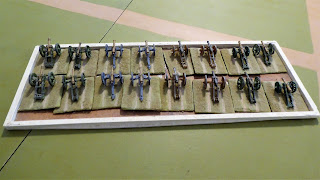 There are four groups of four guns each.

Left are olive green and these are the French guns

Next are blue green.  These are for British and Prussian corps

Next are brown.   These are for Austrian and Spanish corps

Right are different shade of green.   These are for Russian corps.   But they can also be used as French guns if required.

You may have noted that the trays do not have guns.   Nor do all of them have sufficient gunners.  This is because the collection was never intended to be used all at the same time.   So I only bought sufficient guns and crews to support the maximum number of corps on the table.

All of the allied corps have four gun crews.   The French do not.   There are two guard crews and six line crews.   The Bavarians have two gun crews. 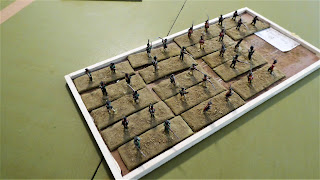 If my wargame rules I used “blinds” for hidden movement at the start of each game.    All figures out of sight are indicated by an oblong card, which shows where they are, but not what they are.   There are extra cards which do not indicate corps, but are designed to add “fog of war”.

To make them a little more attractive I made them into figures stands, the same length as the card.  And I used spare infantry figures to decorate them.   These are the allied stands, I have since found the French ones, but have not yet taken photos.

If a prospective buyer wants to use my campaign and wargame rules, I will include these.  If not I will probably take them off the stands and offer them as spare figures.

I hope that the above has given you all a better idea of the collection.  Over the coming weeks I will complete the more detailed photographs and start to add them to the blog.

I am still undecided about how to dispose of the collection, and would welcome any further suggestions or comments you may have