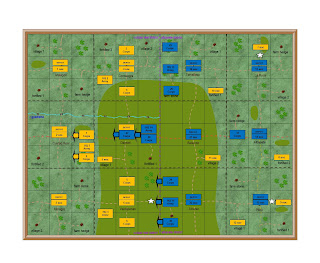 Spanish guerrillas attack the towns of La Roda and Pozo

They are routed at Pozo but undecided combat at La Roda

But 3rd Spanish army is allowed to retreat with minimum casualties 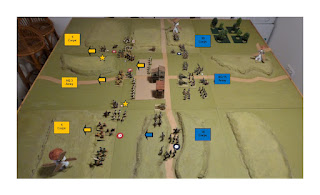 Battle of Valdepenas end of move 8

3rd Spanish army has only one cavalry brigade

They make full use of the hilly terrain to provide cover

The French cavalry attack and rout both artillery brigades

They then redeploy their artillery to pound the garrison

But the Spanish withdraw before they complete their redeployment

The Spanish guerrilla are quick to take advantage

They are routed at Pozo with the loss of 10% casualties

The attack on La Roda is undecided and no casualties

When a garrison is under attack they cannot collect supplies

This will have a gradual effect on the main French army

Guerrilla attacks are decided by the roll of a1D6 dice

2 – retreat with no casualties

Third Spanish army has only one cavalry brigade

But their gunners are all trained

The infantry are well protected by the hills and the town

But their guns are exposed, to cause as much damage as possible.

The French send their cavalry forward to attack the gunners

In the north they are met by a militia cavalry brigade

They hold their own in the first round of melee, causing casualties.

But they are routed in the second round.

The French win the battle as expected.

But their commander fights a very cautious battle, to avoid casualties so early in the campaign.

As a result the Spanish are allowed to retreat.

French casualties will reduce their combat ability for the rest of the campaign.

In addition they will have to detach infantry brigades to hold any towns taken.

And, most important, the further they advance the longer and more vulnerable their lines of supply.

So though they have won the first two battles the outcome of the campaign is still very uncertain.

An interesting action in that it shows that not all battles have to be decisive affairs. It seems that the French victory has given them a slight advantage, but the fact that the Spanish managed to get away and their partisans have hampered the French opportunity to resupply leaves the campaign in an interesting situation. I must admit that if I was the French commander I’d try to use a ‘bite and hold’ strategy, ensuring that my supply lines are well protected whilst trying to tempt the Spanish to attack when I have the advantage.

At this stage of the campaign the French have an advantage, particularly in cavalry. So they need to be aggressive to take the three border towns. But they must do so without taking too many casualties.

Once they have done so their supply routes become longer, and more vulnerable to guerrilla attacks. To counter this they have to detach infantry to garrison the captured towns. Meanwhile the Spanish are falling back on their own depots.

So the Spanish have little incentive to attack the French, at least in this early stage of he campaign.

At least the French are well on the way to achieving their initial objective.