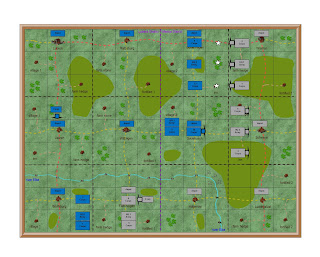 Having lost three of the four battles, Blucher is desperate to regain the initiative

2nd Prussian army has been forced to retreat to Schwerin.

They are short of supplies, and must stand and fight if 3rd French army pursue 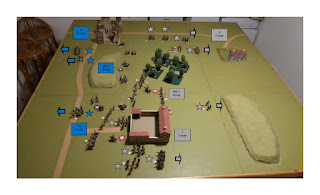 Battle of Boltenhagen end of move 10

The battle opens with 2nd French army deployed in front of the town of Boltenhagen.

Augereau has combined three infantry brigades as a reserve and deployed them in front of the town.

Bulow has also created a reserve which he also posts in the centre.  His consists of two elite grenadier brigades and 2nd corps artillery.  As they advance the French reserve quickly withdraw into the safety of the town.

The Prussians are particularly unlucky in this game, or perhaps the French are exceptionally lucky.   At one critical stage the French cavalry roll 11 with 2D6, in response the Prussians roll 1 with 1D6!  With luck like that it is not too surprising that the Prussians suffer a crushing defeat.

The later battles in a campaign phase are always the more interesting and challenging.   By then both armies have suffered considerable battle casualties, and at least one is experiencing supply problems.    It is not surprising that the loser usually has more casualties.  But this is often countered by the winner have more serious supply problems.   Having won earlier battles the winner pursues the retreating loser.  This takes him further from his main supply base, and his supply route is longer.   The loser usually retreats closer to his main supply base, making it easier to resupply.

But the most challenging aspect is casualties.   Before the battle both sides will usually have consolidated their infantry casualties into one brigade per corps.  But cavalry and artillery casualties must be replaced, and this takes time.   For each day that a corps is not moving or fighting they will receive 10% of one brigade in reinforcements.   So the losing side will usually start the battle with more casualties than the winning side.  But they are usually well supplied and in defence.

All of this applied in this battle.   But the final element, which is luck, won the day.    When both sides are weakened by casualties they are very vulnerable to morale tests.   One bad dice can rout a brigade, and then every friendly brigade within 4” has to test their morale.  It is not unusual for the rout to spread very quickly.

This is what happened in this game.   At one point the Prussians had the upper hand.  They had broken the corps to their front, and were redeploying to support the centre.  Their had to move their artillery to engage the new enemy, and once they had done so could expect to break them quickly.   But they only had one landwehr brigade to support the guns.   We use alternative move sequence, decided by picking a poker chip from a hat.   At critical points in a game the one who moves first has a huge advantage.   In this instance the French moved first.   Their regular infantry brigade charged and broke the landwehr brigade, who routed through the limbered artillery.   The gunners had no further support and were disordered by the fleeing infantry.  They needed at least 5 with 1D6.   They rolled 2 and joined the rout.

The game would go on for another three moves, but that was the point at which the Prussians lost.

An interesting game, particularly for me as the Prussian player!