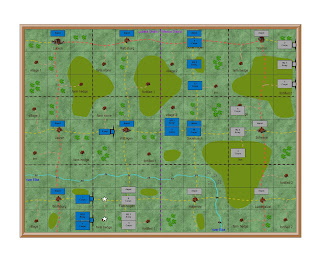 Having secured the north and centre, Napoleon has effectively won the campaign.

The Prussians are strong south of the river Elbe, but must retreat or run the risk of being trapped there

All Napoleon has to do is wait for Blucher to order 3rd Prussian army to retreat.

However Napoleon is determined that his guard should have a victory to offset their earlier defeat. 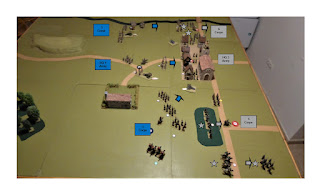 Battle of Fletchingen end of move 8

3rd corps is given the task of pinning the Prussian right flank.   1st corps and the French reserve are to crush the enemy left flank and then swing towards the centre and take the town.

The result is everything that Napoleon could have wished.   All of the fighting was done by the guard, and for the loss of just 100 casualties they broke 5th Prussian corps.

At nightfall the town was still held by Blucher.   But with both of his corps in rout he could only order a general retreat and abandon Fletchingen.

The outcome of this final battle of the Lubeck campaign was exactly what Napoleon wanted.  But it was pure luck.

The game only lasted eight moves.   At the end of move six it was completely open, and either side could have won.

The French needed their artillery to weaken the enemy infantry before launching their own attack.  The gunners of both corps let them down badly.   The first artillery fire of the campaign was directed at the French guard artillery.   The Prussian gunners required 10 with 2D6.   They rolled two sixes!.   The French gunners failed their morale and were shaken.   Fortunately they passed the second test.  But they lost two game moves.   In the next two moves they failed to cause any casualties, even though they were within short range of the enemy.

The Imperial Guard were outnumbered by Prussian infantry.  Most brigades on both sides already had battle casualties.   The guard cavalry moved forward to protect the infantry.  As luck would have it they moved first, and the Prussian cavalry were able to charge them.   This gave the Prussians a slight advantage, but this was balanced by having more casualties.   A Prussian victory would have been the end of the French attack, and would have resulted in a French defeat.   But the French won.

The rout of the Prussian cavalry quickly spread to their supporting infantry and then throughout the whole army.

Napoleon had achieved his much desired victory.   The Imperial Guard had restored their honour.   But it could so easily have been a completely different result.