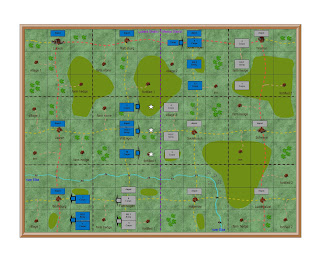 1st Prussian and 2nd French armies both regroup and resupply 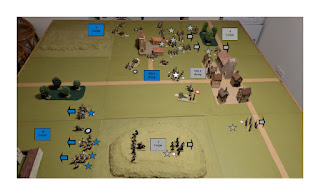 Battle of Gadebusch end of move 12

Both armies start the battle with considerable casualties, particularly in the cavalry.

The campaign is going bad for the Prussians, and Blucher must hold Gadebusch until he received confirmation of what happened at Fletchingen.

The casualties made individual brigades very brittle and prone to lose morale tests.    However because they applied to both sides, they largely cancelled each other out.

This may explain why the wargame went the full twelve rounds

Making each army group larger and having three armies per side in the campaign is really working well.

Having three armies per side, each with its own campaign area, is more artificial.   It means that all movement tends to be left to right.   But it does clarify lines of communication and supply.   It also makes it easier to have a battle every campaign day.   An army fights on day one, loser retreats day two, both sides resupply and regroup on day three then fight again on day four.

It has also solved one of the most annoying aspects (for us) of having all wargames created by a single campaign.   At the end of the wargame I then have to complete the administration for that day.  This includes typing up battle reports, completing the campaign diary and adjusting orders of battle to show new casualties.  All of this takes at least one full day, often two.

I  have to start the administration for the next day.  This includes updating the supply situation of both corps and depots then writing orders for each corps.   These orders are then plotted on the campaign map.  If a battle results I have to create the initial battle report and battle maps.   Casualty lists have to be amended to show current strengths and the wargames table has to be set up and the figures deployed from the map.   This requires at least one more day.

So there were often many days, or even a week, before the end of one game and the start of the next.

This was all part of the general plan when I increased the orders of battle from four to six corps in each phase.  But it has worked much better in practice than I had dared hope.