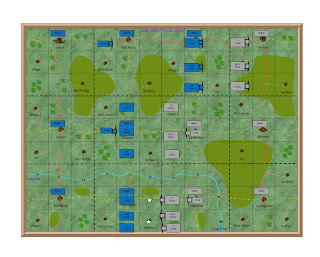 Both are regrouping and resupplying

The town is held by 1st French army, including the Old Guard corps 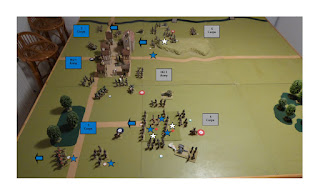 Battle of Fletchingen end of move 10

This weakens both corps on the flanks.

Blucher also forms a reserve, but of two infantry and one cavalry brigade

He also deploys them in the centre.

Napoleon must decide whether to put two brigades inside the town

He decides on the former, making an attack on the town unlikely

Blucher can now concentrate both 5th corps and his reserve on the area between the town and the farm.   This area is held by 1st (Old Guard) French corps.   5th corps pin the French infantry in and around the farm.   The Prussian reserve attack the guard infantry and cavalry holding the centre.   When the French lose a cavalry melee they also lose the battle.  Their gunners seek shelter in the farm and the Prussian artillery can move into close range and bombard the garrison.

The French deserved to win, but wargaming is never fair.

This was a great wargame, and one which demonstrated how the better army does not always win.   Jan commanded the French (including the Old Guard), I had the Prussians.

We actually fought this wargame three times, something which has never happened in the campaign before.   The first attempt was a walk over for the French.   The Old Guard consisted of two A class infantry and two B class.  Both artillery and cavalry were A class.   This was reasonable for the Old Guard.   5th Prussian corps had one A class, one B class and two C class infantry brigades.  Both cavalry and artillery were B class.

Not only were the French overwhelmingly stronger, they also held a very strong defensive position.   A crushing victory was not too surprising.  However lucky French dice, and particularly poor Prussian dice, made matters even worse.   The result would in fact mean the premature end of the Lubeck campaign.

I amended the combat tables to give a quicker result.  The previous one often resulted in long melee or firefight.   But I got the balance wrong, and the second game resulted in a crushing Prussian victory.

This prompted a quick review of the distribution of troop types in different armies.   The immediate result of reducing the cavalry and artillery from A class to B class.   I now need to do a more comprehensive review, and hope to do so before the next campaign phase.

Meanwhile the third game resulted in a Prussian victory.   But this was due to the French being too cautious and leaving the guard cavalry and artillery to hold the centre, with their reserves being too far back and in the town.   They could still have pulled it off, but losing a cavalry melee resulting in them losing the centre and the Prussians being free to move their artillery into close range.

Another very enjoyable wargame, and one that will lead to a major overhaul of the orders of battle for all ten army groups.

Another very interesting battle report. The result seems to have been the opposite of what I would have expected! The French Guard beaten; now that will be a story that will live on for a long time!

What would the result have been if you had used your previous combat system? I suspect that it would have been somewhat different, and the Prussian would have lost … probably quite decisively.

Yes, with the previous rules she would easily have won. Two of the four infantry brigades were elite, so was the cavalry and also the artillery!

It is very difficult to make an elite formation like the Old Guard stronger, but not too much so. Particularly as the outcome is always down to a dice throw.

In this game the French lost because of the tactics they used, so I am quite happy with that. But only time will tell whether I have solved the problem, or just created another one!