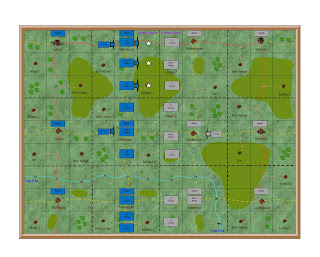 In the north 2nd French army attack Boltenhagen.   The Prussians lose both cavalry melee which open the battle and retreat before the French can pin them

In the centre 2nd Prussian army retreat to Gadebusch having failed to take Wittingen.

In the south 1st French and 3rd Prussian armies face each other at the border. 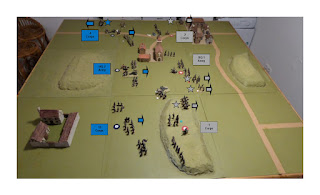 Battle of Boltenhagen end of move 8

The Prussian artillery proved to be very ineffective, but no less than their cavalry.   The Prussian gunners opened the battle, but failed to inflict any casualties.   The French cavalry then attacked on the flanks.   The Prussians lost both melee and ran away.

By the end of move 8 the two Prussian cavalry brigades, one infantry brigade and half of their artillery were in rout.  Facing certain defeat the Prussian commander ordered a general retreat and abandoned Boltenhagen.

First two battles to the French, not looking good for the Prussians.

I have recently done a major rewrite of the wargame rules.  This was largely to avoid prolonged melee, which have dominated the last half dozen wargames.   The previous rules were designed to allow more than one round of melee.   But in fact it often resulted in two or three rounds, with both sides only breaking when they reached 40% casualties (an automatic rout).

The new rules were designed to allow a faster decision, most likely in just one round of melee.  But usually with less casualties.   This would reduce long period of inactivity whilst both sides replaced heavy cavalry casualties with campaign replacements.

Unfortunately the dice resulted in more extreme results in this game.  Melee only lasted one round, but casualties were 20% to 30% for all four cavalry brigades.  This was due to extremely good (or extremely bad depending on which side you were on) dice.

The result a second Prussian defeat, and an unexpected one.   They are the aggressors in this phase, but are already in serious trouble after only two campaign days.