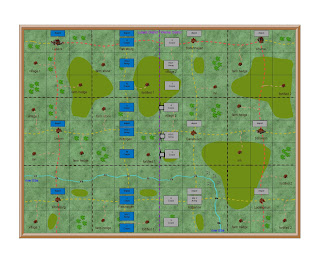 The Prussian army is deployed on the Lubeck/Wismar district border

The French army is further back from the border, to ease resupply

Despite suffering most casualties, the French held their position and the town 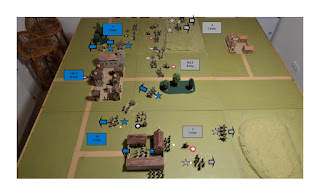 Battle of Wittingen end of move 12

Despite suffering more casualties, the French won the battle

At nightfall they held the northern flank

They also held the town in the centre

They had lost the southern farm, but the Prussians were too weak to advance

The French lost 5100 casualties and the Prussians 4400

The French had 3 infantry, 1 cavalry and 1 artillery brigade in rout

The Prussians had 2 infantry and 2 cavalry brigades in rout

The French commander took one infantry brigade from each corps to form the garrison of Wittingen.

The Prussian commander created a reserve of both corps artillery plus the best infantry brigade from each corps.   They supported 4th corps in the north, but were not as effective as expected.   They lost a prolonged cavalry melee, and had to form square against the French cuirassiers.

Wittingen came under artillery fire, but did not suffer any casualties.   At nightfall it was still firmly held by the French.

Without artillery support it was difficult for 3rd Prussian corps to attack in the south.   Their infantry advanced against the farm, their cavalry engaged the French hussars.

This prevented the French artillery from firing on the Prussian columns.   Three Prussian infantry brigades attacked the farm.   Despite heavy casualties the garrison held on until nightfall, when the broke with 60% casualties.

Despite inflicting more casualties than they received, the Prussians were unable to press home their attack.  This was partly because the French artillery dominated the flanks, and their own concentrated artillery was not as effective as hoped.   This in turn prevented their two elite infantry brigades from attacking the town.

It was a sound Prussian plan of attack.  But the Gods of Dice were not with them.

An interesting battle report, and the sort of believable result that your rules and campaign system seem to generate. I will be interested to see how this develops.

I like the campaign in northern Germany, because the French have the Old Guard. It is only one of six French corps, but it always poses interesting problems about balance. It has to be very effective, but not so much so that it upsets the balance between the French and Prussians.

For some time I have been pondering how to achieve a good compromise, and no doubt this campaign will help to concentrate my thoughts.

You might be interested to hear that I have given Jan command of the French. In her role of Napoleon she commands the Old Guard corps!