This map is used for planning the campaign phases for the north Germany campaign area.   It shows the three military regions of Osnabruck, Brunswick and Berlin.   Each region has nine districts.   Each district has nine squares, each square is a wargames table.   A district covers the area of a campaign phase. 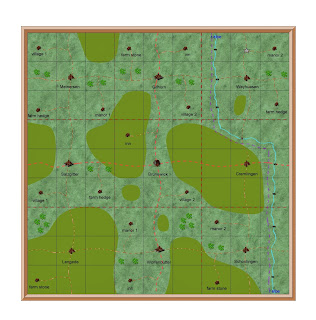 There are nine towns, and therefore nine wargame tables.   The three squares between towns is one days march in the campaign.

A similar map has been used from the start of the 1813 campaign.   They started as hand drawn maps and have been greatly improved by using a campaign map making system called ProFantasy.

The objective of each campaign has always been the city in the centre of the map, in this case Brunswick.   Usually one army is tasked with attacking, and the other with defending.   Sometimes both armies will start at the edge of the map, and both will be tasked to take the city. 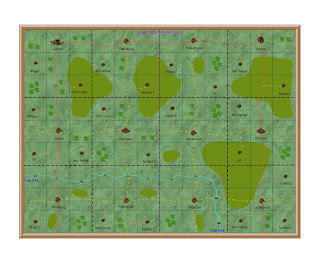 For the next campaign phase I will be play testing a new map.   Instead of showing one district, this one shows half of two districts.   Lubeck is on the left and Wismar on the right.   It has also been extended to include a wider area.

In this campaign the objective will be for the Prussian army (in Wismar district) to attack the French army (in Lubeck district)   The centre of the map is the border between the two districts.   Each army will be deployed either side of that border.

The reason for this change is to show the two district cities.   Wismar will be the base and main depot for the Prussians, Lubeck for the French.   There are six towns either side of the border, each will be the depot for one corps.   This will make the supply system more complicated, and easier to disrupt.

It should also make the campaign objective harder to achieve.   Due to the longer distance is should also produce longer campaign phases.   Instead of representing nine wargame tables, it will now be twelve tables.