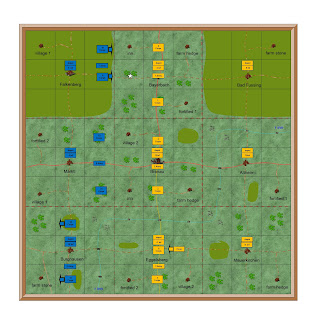 All six Austrian corps are running short of supplies

There are sufficient supplies available, but they are in the rear depots

The Bavarian army has no supply problems.    Four of the six corps are fully supplies with four days.

In the centre 8th Bavarian army is fully supplied.     But they must rally and regroup.

In the south 9th French army retreat to Burghausen having lost the battle of Eggelsberg.   3rd Austrian army occupy Eggelsberg and establish a new depot 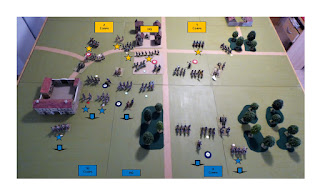 Battle of Bayerbach at end of move 12

Both armies are evenly matched, though the Bavarians have more battle casualties.

Consequently they must inflict artillery casualties before the infantry attack

Both Bavarian corps arrive at the start of move one, and deploy out of artillery range

They then advance their artillery and open fire.   This proves ineffective.

The Bavarian cavalry advance and engage in a prolonged melee, which results in massive casualties on both sides.   All four brigades retreat with 40% casualties

Massena has only one option left, an infantry attack.   His right flank is outnumbered, so 10th corps, on the left, will deliver the attack.   They will be supported by two elite brigades in the reserve, commanded by Massena.

The reserve attack the town, 10th corps the Austrian right flank.   Both sides suffer heavy casualties, but the Bavarians take the town.   However 10th corps is defeated and retreats.   On the opposite flank 9th corps also retreats, and Massena has to abandon the town.

The Austrians won the battle, though they lost more casualties.

It is not unusual in the later stages of a campaign for a weaker army to attack a stronger one.   This is usually caused when one side has a temporary advantage, often due to supply problems.

The defender always has to deploy his figures first.  This allows the attacker to concentrate against any weakness in the defence.   Now that we allow commanders to create a reserve, this tends to strengthen the attacker more than the defender.

However the attacker will usually suffer more casualties, particularly from artillery as they close to contact.   He may be able to cause artillery casualties before the attack, either with his own artillery or cavalry.  If not his chances of success are slim.

Or he may gain cavalry superiority by defeating the enemy cavalry.   This will at  least protect his infantry as they move forward, and force the enemy infantry into squares.   However if the enemy defeat his cavalry, the attack must be abandoned.

The outcome of the game is usually decided by the infantry.  However if they do not have some advantage they just have to rely on the luck of the dice.