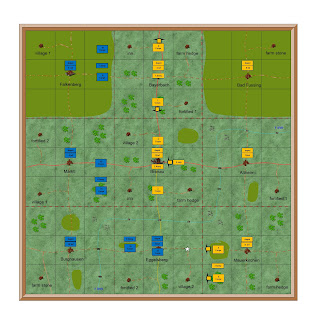 In the north the Bavarians continue to regroup and resupply

the Austrians redeploy to defend Bayerbach

In the centre the Bavarians rally, regroup and resupply

The Austrians also regroup and resupply, they also receive supplies from Altheim

In the south the Austrians attack Eggelsberg 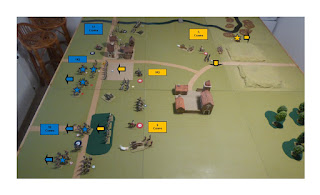 Battle of Eggelsberg at end of move 12

The French are stronger, so the Austrians hope to cause artillery casualties before they attack.   However after four rounds of artillery fire no casualties are recorded.

In the north 5th Austrian corps send their cavalry forward, hoping to defeat the French cuirassiers and force the infantry into square.  They lose the melee and are forced to abandon their attack

In the centre both commanders have created a reserve of two infantry brigades.  The French put both in the town.  The Austrians hold them in the centre, waiting to see which wing will gain an advantage from the artillery duel.

In the south 6th Austrian corps also send their cavalry forward.   Here they win the melee and force the infantry into square.  The Austrian infantry and artillery advance and engage the French infantry at close range.

The Austrian commander commits the reserve to support his southern flank.  They take half of the town, as 6th corps take the woods.

At nightfall the French hold the northern half of the table, the Austrians the southern half.  However the French have lost more casualties, and have six brigades in rout.  Under cover of darkness they retreat leaving Eggelsberg to the Austrians.

This is the fifth battle of the campaign, and both armies have campaign casualties.   This makes them more fragile in morale tests, and therefore less likely to risk an attack unless the odds are in their favour.

The French start the battle stronger than the attacking Austrians.   They have seven infantry brigades to six Austrian.   However the Austrians must attack to take advantage of their temporary strategic advantage.   Both corps of 3rd Austrian army are concentrated.   Those of 9th French army are separated to keep within supply range of Burghausen.

The Austrians hope to inflict some artillery casualties before committing to an infantry attack.   They create a reserve of two infantry brigades in the centre, which can support whichever flank causes the most casualties.  However after four rounds of artillery fire they have failed to inflict any casualties.

Running out of daylight the Austrians send their cavalry forward.   If they can defeat the enemy cavalry they can force the French infantry into square before their own infantry attack.   On the northern flank they lose the melee.  On the southern flank they win

At nightfall the French hold the northern half of the battlefield (and the town), the Austrians the southern half.  But the French have suffered more casualties, and six of their brigades have routed.   Only one Austrian brigade is in rout.   This was largely due to poor morale dice for the French.

An interesting wargame which looked like a French victory, until their luck ran out in moves 11 and 12.