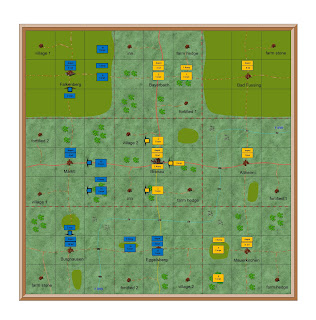 A much needed day of rest, regrouping, reorganisation and resupply

In the north Bavarians deploy at Falkenburg, reorganise and resupply

Austrians set up new depot at Bayerbach, reorganise and resupply

In the centre Bavarians retreat having lost the battle of Branau

Austrians occupy Branau and set up a new depot

In the south Bavarians regroup, reorganise and set up depot at Eggelsberg

Austrians regroup at Mauerkirchen and resupply

After three days and four battles both armies are urgently in need of rest, reorganisation and resupply.   All twelve corps start the day with just one days supply.

To resupply they have to be within three squares of a depot, not in contact with the enemy and halted for the day.   All corps are within range, but the depots do not have sufficient supplies to bring each corps up to four days.

Reorganisation is used to make each corps operational and battle fit.  To reorganise a corps must be in supply, halted for the day and not in contact with the enemy.  There are three elements in reorganising.

Second all infantry casualties can be transferred to one brigade, less 10%.

Third each corps receives reinforcements of 10% of one brigade.

Casualties affect the morale and combat effectiveness of a brigade.   Each 10% results in minus 1 on morale, combat and firing charts.

Reorganisation concentrates most of the infantry casualties in one brigade, which in effect takes no further part in the campaign.   It also allows the remaining brigades to quickly become effective again.  However by leaving 10% casualties with the brigade for the remainder of the campaign, it also reduces their morale and combat ability.

The aim is to allow a badly damaged corps to recover quickly to be able to take part in the campaign.   However it will never be fully effective until the next campaign phase.