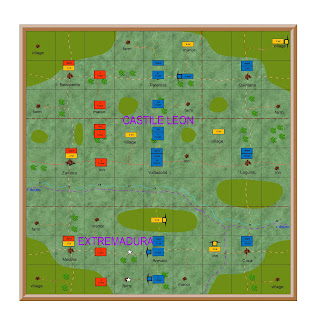 Soult is short of supplies.

It will take another two days to reorganise and resupply

Wellington has problems of his own

He concentrates his army in front of Benavente, Zamora and Medina

1st, 3rd and 4th corps are in urgent need of reorganisation and resupply 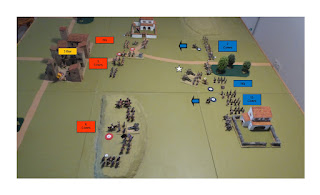 The British start the battle with more infantry than the Spanish, seven brigades to six French.   In addition there is a Spanish brigade in Medina.

They also occupy a strong defensive position, particularly their right flank which is deployed on the hill.

The French commander is well aware that he must pin the hill and attack against the infantry deployed in front of the town.   He must also cause some casualties before he orders the attack.   He take command of the artillery of both corps to create a grand battery.

The gunners fail to inflict any casualties on the British, and the attack is defeated with heavy casualties.

I have written our wargame rules to discourage counter battery fire.   We roll 2D6 to determine whether artillery have scored a hit.   Against infantry the gunners require 8 at long range, against gunners they require 11.

As the attacker in this game I felt confident moving my artillery into range of the enemy infantry, even though this meant that Jan could fire on my gunners first.   I was less than pleased when she rolled 11 with her first attempt.   I was even less pleased when my gunners failed their morale test and were shaken.   This meant they would have to rally before they could fire.   They failed to do so for the next two rounds.

Out of eight moves my gunners only fired twice, and they missed both times.

Not surprising that I lost the game!