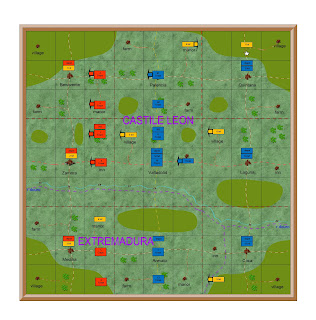 Following his defeat at Valladolid Wellington orders a general retreat

Soult must now reorganise his depots and lines of supply

He now occupies six of the nine Spanish towns

The first guerrilla attack is on the garrison of Quintana

The attackers are driven off with a loss of 20% casualties

However the attack halts resupply to the French north wing

The British are in real trouble, having been forced to retreat to the left of the map

Another defeat could easily mean that they lose the campaign

However the French success is also causing problems

They have taken the three centre towns

But their depots are in the three on the right.

Half of the French corps are out of supply range.

This requires six infantry brigades to defend them

A guerrilla band can attack a garrison or a convoy

The three right hand towns are now vulnerable to attack

They can only do so for one move, then must return to a farm or village to resupply

They roll 1D6 to decide the outcome

The guerrilla roll a one, lose 20% casualties and rout

This outcome is bad news.

The guerrilla can replace one casualty, but will always have the remaining one

This will be minus one on all future dice throws

So they lose one days supplies.

It will take them another day to establish a depot there, and another days supplies