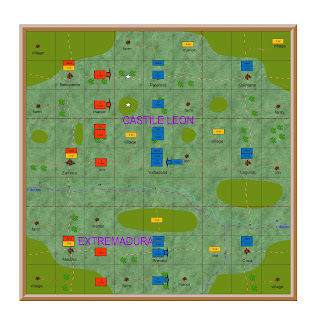 The French still have serious supply problems, and their defeat at Medina is not helping.   Most of their corps are running short of supplies and desperately need time to reorganise their supply depots and redistribute the supplies from their main depot at Laguna.

The British are close to their depots and do not have any problems with supply. However they are in need of rest and reorganisation, and also to receive reinforcements to replace battle casualties.

Wellington is encouraged by his victory at Medina.   He also wants to take full advantage of the French supply difficulties.   He orders 1st and 2nd corps to attack Palencia.  The two French corps defending the town are almost out of supply.   If he wins, and they are forced to retreat, they will also suffer attrition casualties. 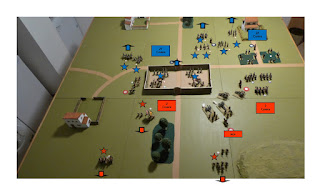 Both sides started the battle with considerable battle casualties

This resulted in a considerable amount of counter battery fire

The French lost this exchange and retreated without their guns

This allowed the British to use their guns to great effect, particularly against the garrison.

The British take the town, but are too tired to mount a pursuit

The French have lost 16 infantry, 7 cavalry and 5 artillery casualties (7600 men)

This was another battle where casualties from earlier battles played a large part in the outcome.   Casualties affect both combat and morale.

Brigades count minus one on the morale chart for each casualty.   They also count plus one for support.   To count as support a brigade must have a formed brigade within 4”.   As a result most corps are deployed with their brigades within supporting distance.

The problem is that when a brigade fails its morale and routs, all friendly brigades within 2” must also test their morale.   If those supports have existing casualties they are more likely to lose their own morale test.  If they also rout all brigades within 4” of them must test their morale.   So it is not unusual for a rout to spread throughout the whole corps.   This is what happened at the end of this game.

Each casualty is also minus one on fire and melee tests.  This makes the artillery less effective, and in particular long range fire to soften up the enemy before the infantry attack.

However in this game the attacking British artillery were more effective, and the defending French paid the price.

This is why casualties can seem very one sided, particularly in those battles fought later in the campaign when most brigades have existing casualties.