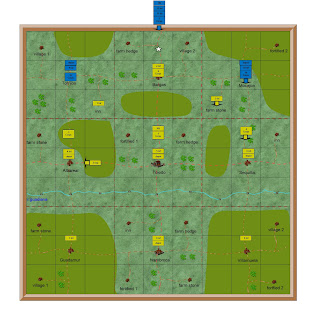 With his flanks secured by the battles of Torrijos and Mocejon, Suchet leads the main French attack down the main Madrid to Seville road.   The town of Bargas commands this road.  It is held by a militia brigade and supported by the full strength 2nd Spanish corps.

Suchet has 7th French corps, plus two infantry brigades from the army reserve.   He outnumbers the Spanish in infantry, and is confident of an easy victory 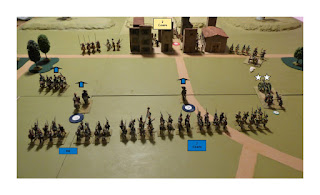 Suchet moves forward with six infantry brigades in the centre, cavalry on the left and artillery on the right.

His gunners advance with confidence to deploy within short range of the Spanish artillery.   They are unpleasantly surprised when the Spanish open fire and hit them at long range, and again as they unlimber at short range.   The French gunners pass their morale test, but will now be minus two each time they fire.

Meanwhile the dragoons advance on the French left.  They are pleased when the Spanish guerrilla cavalry move forward to meet them. 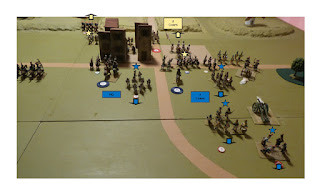 The French dragoons on the left flank have an easy victory against the guerrilla lancers.  The supporting Spanish infantry move back in square, leaving the dragoons helpless to exploit their victory.

The French gunners continue to fire at short range, but with minus 2 calculating hits they cause no casualties.

So the French infantry must attack unsupported.

On the left Suchet leads two conscript brigades against the left halt of the town.   The Spanish garrison is also a conscript brigade, but have the advantage of hard cover.  And though outnumbered two to one they hold on.   One French brigade is routed with 20% casualties, and the second withdraw disordered with 10% casualties.

In the centre the French have more success.   They rout the militia garrison with 30% casualties.  The French receive 10% on each brigade.

Meanwhile the Spanish gunners continue to fire on the right of the French line.   Two brigades are sent to engage the gunners and the infantry brigade supporting them.   Once more the Spanish gunners do great damage.  They halt the leading brigade with their first volley, and then pound them until they rout with 30% casualties.

The second French brigade engaged the supporting Spanish infantry.  But both are conscript and the Spanish held their ground.   When the leading brigade broke and routed, the second brigade had to test their morale.  They failed and joined the rout.   The gunners, who had already suffered 20% casualties, now also had to test their morale because of the rout.  They also failed and joined the rout.

By nightfall three of the six French infantry brigades were in rout, plus the artillery.

Only one brigade, and the cavalry, were still formed.   Suchet ordered a retreat to rally, regroup and consider his options.

This was a real setback for the French invasion of Andalusia.   It was the first time that the French had lost a set piece battle with the Spanish.   And it was particularly unexpected because the Spanish has less infantry than the French.

This comes on top of the heavy French casualties at Mocejon.   It is not a very promising start to the French invasion.