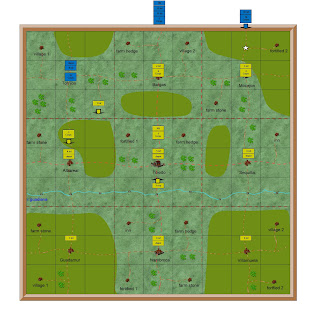 The Spanish garrison of Torrijos because the first guerrilla band 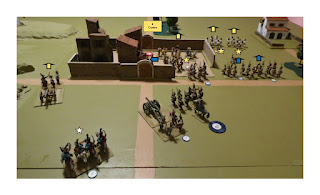 The Italians were always going to win the battle of Mocejon

The Italians had a full corps of four brigades of infantry, cavalry and artillery

They were also reinforced by an infantry brigade from the reserve

This brigade was to garrison Mocejon after the town was taken.

They deployed their cavalry on the left, to pin the Spanish artillery

Their own artillery was in the centre, and all of the infantry on their right

With no Spanish cavalry their gunners did not need infantry support.

The Italian artillery moved into close range of the walled town

They came under fire from the Spanish artillery, and lost 10% casualties

They received 10% casualties, which caused them to halt in disorder

Before they could withdraw the Spanish artillery fired again.

The cavalry lost another 10% casualties and withdrew in disorder

As Italian commander I had made a serious mistake in planning the attack.   I knew the walled town would be difficult to take, and I wanted all of the infantry to be available for the attack.   All five brigades were on the right, leaving only the cavalry to take care of the Spanish gunners.  I was confident that the full strength hussar brigade could do so.

So it was a bit of a shock when they had to withdraw with 20% casualties just as the infantry attack went in.   The Spanish gunners received no casualties, and were now able to fire on the infantry as they started their attack.   It would take too long to send the reserve infantry brigade to attack the gunners, and it was very likely they would also be repulsed with heavy casualties.   By now the hussars had rallied, so they were sent in for a second attempt to take the guns.   The Spanish gunners fire again, and caused another 10% casualties.  The hussars routed with 30% casualties.

By now it was nightfall.   The Italians had broken into the right hand section of the town.   Three Spanish brigades were in rout.   But the fourth brigade still held half of the town.   And their artillery was full strength.   Despite this they would not be able to withstand a further day of fighting, so they withdrew under cover of darkness.

Given time all of the Spanish casualties, less 10% per brigade, would be replaced.   However the Italians would only receive 20% of their cavalry casualties.   The rest would remain.

All brigades of 16th Italian corps would be weakened for the remainder of the campaign.   Half of their infantry started the campaign no better than the Spanish conscripts.  They would now be weaker than a full strength Spanish brigade.   Their gunners would also be less effective.

It was a serious, and unexpected, setback so early in the campaign.