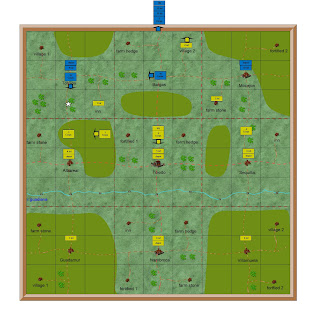 Giron orders his army to concentrate between Albareal and Toledo

He sends 1st corps to support 3rd corps at Albareal

This is to distract the Spanish from the weak French centre 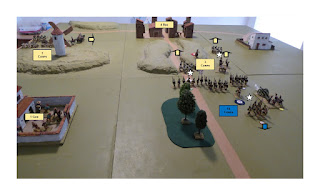 Albareal should have been an easy French victory

It is held by a weak 3rd Spanish corps, who have run out of supplies

They are reduced to two infantry brigades and corps artillery

There is also a militia brigade in garrison in the town

And a guerrilla brigade resting in a nearby village

Their cavalry charge the gunners, but are routed with 20% casualties

The gunners then concentrate on the approaching infantry, and rout one brigade

Without cavalry support, and with one brigade in rout, the Poles halt

After four days and four battles his army must now halt, resupply and regroup

The Spanish army is not much better off

3rd corps has already run out of supplies

The other three corps are down to one days supply

Each French corps can carry a maximum of four days supplies

The Spanish corps can only carry three days supplies