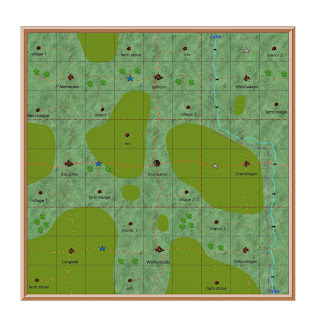 There were five battles during this campaign.   Napoleon won three, Blucher won two.    All of the subsequent wargames worked well, and were enjoyable.   They were not in anyway affected by the new level, even the campaign and wargames maps look the same.

But in the background there was a lot going on. 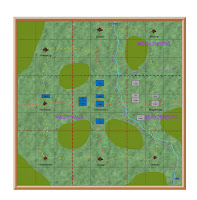 This is the where the new level of command comes in.

This campaign took place in the centre of the nine squares.   Each square on this map is a wargames table.

The previous system was simple.   At the end of this campaign I would put a coloured star on the map of Northern Germany.  This was to indicate which side won, and would show a record of who won each campaign phase.   However I would pick the location of the next phase at random.   Usually because that particular town had not been used before.

The new system makes this an extra dimension of the campaign.    Corps are placed on this map to show where they were at the end of the previous campaign phase. They would be limited to one corps per square.   This means each corps occupied a wargames table size area.   Each army will occupy one of the nine districts of the region.   I must now decide how I am going to carry on this layer of command to produce the next campaign phase in Northern Germany.

Ideally I would eventually use all nine districts as campaign phases.  But I will have to create a narrative which makes sense of it all.

In this particular campaign it has worked out well.   The Prussians have retreated behind the river Elbe, a logical move for a defeated army.   The next logical move would be for Napoleon to attack Magdeburg in the next campaign phase.   But if the Prussians are defeated again they will retreat off the map.   I will have done a lot of work to produce just two campaign phases.
I will have to give some thought about how to create this new grand strategic aspect of the campaign.   Perhaps it will involve some liaison between the Prussian, Russian and Austrian armies.   So that a victory in one theatre will have an effect on the other two.