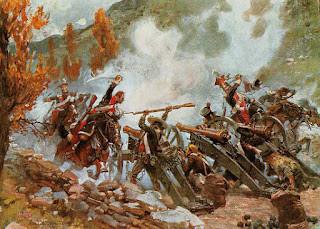 One of the few disadvantages of frequent wargaming, particularly with the same rules, is that you soon get a feel for what works, and what doesn’t.

Jan and I wargame most days, if only for a few hours.  And as we have used the same orders of battle and campaign system to produce our wargames, they produce similar wargames and therefore solutions.

I have long felt that once you master a set of rules, whether commercial of self written, you tend to play to the rules rather than historical tactics.   The “better” the rules, the less important this becomes.   By “better” I mean the more your chosen rules produce the type of result you want to achieve.   This is, of course, very subjective and almost unique to each wargamer.   We all like to believe that we are recreating history on our wargames table, but of course this would be an impossible objective.

The best we can hope for is that our games will give us similar tactical problems to a commander in our chosen period, and hopefully will “feel” and “look” right at the same time.   Again very subjective and I would never suggest that I have achieved anything other than my personal prejudices.

Recently I have become disillusioned with the outcome of our cavalry v artillery melee.   Rather strange that it should have taken so long to become obvious.   Our “house rules” are about 12 years old, though they have had numerous amendments.

Regular readers will know that we favour simple rules, strongly influenced by the element of chance represented by the dice.   This is because Jan and I only wargame together, and both very familiar with the rules.   So the strong element of chance adds the required uncertain outcome to each wargame.

Over the past month or so I have become aware that cavalry charging artillery have a very strong chance of winning the melee.   The rules are balanced and make allowance for better troops, casualties and whether the artillery have fired last move.  So it may just be that my cavalry have had a run of good dice over the past dozen or so wargames.

Whatever the reason I have rewritten the rules.   The sequence is now very simple.

Artillery get to fire on the cavalry at long range.   They require 9 using 2D6, plus or minus the usual modifiers.   The chances of a hit are low.

When the cavalry charge the artillery fire at short range.  This requires 5 using the same table.   The changes are very good.

The cavalry test morale, but not our regular morale test.  They roll 1D6, with usual modifiers.

3 or more they charge home and the gunners rout with 20% casualties.

It seems to be working well, though it is very early days