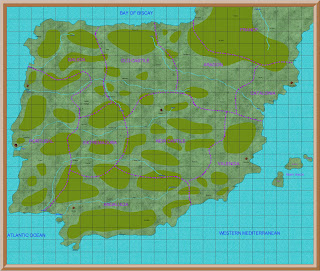 Spain was always going to be the second phase of the new campaign.   With three campaign areas in Germany, and two in Spain, it makes sense to alternate each campaign phase.   This not only allows different uniforms and terrain, but also a different style of wargaming.

In Germany there are three campaign areas, each of three regions.   The left hand one is always the French reserve area, and the right hand one the allied.   This covers the whole of Germany

In Spain it is more complicated.   The French did not have a secure reserve area.   All of Spain was hostile to them, they only controlled the area which they currently occupied.   It would be essential to have this reflected in the campaign.

For my first attempt I divided Spain into eight regional areas.   This was three in the north, three in the centre and two in the south.   But given the area covered by Portugal it would share a border with three of those regions.   The British had to have their lines of supply running from either Lisbon or Oporto.   So they would have to deploy in the north or centre

In my campaign the Spanish have always been in the south.  This is because for most of the Peninsular War the French occupied almost all of Spain.   The Spanish command and control had to abandon Madrid and move to the southern town of Cadiz.

This was OK when there was no grand strategic element to the campaign.   But I would now need Wellington to be affected by what happened to the Spanish field army.

It was pretty late in the day when I came to fully appreciate this.   By then I had made the new maps for Spain and even published them on here and in the Campaign Diary Blog. 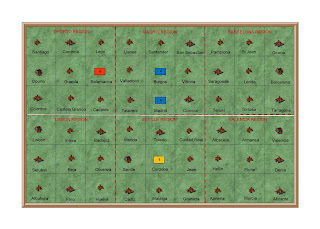 The new Spain would have six regions, as shown above.   Wellington would operate in the north, and Giron in the south.   This would mean that the centre regions, the active region in the campaign, would be Madrid to the north coast, and Madrid to the south coast.   This was the area most used in the previous campaign.

It does mean that the Lisbon region would be in the Spanish campaign area.   This was not ideal, but could not be avoided.   I would also have the option of spreading the Spanish area from Seville to Valencia

Fortunately the French did not have a secure rear area in Spain.   Because neither Barcellona nor Valencia regions would fit that bill.   Instead they would operate from Madrid and Burgos.   And the critical city of Madrid was on the border between Wellington and Giron.

I am very pleased with this compromise.  But I do wish I had thought of it before I created all of the new campaign maps, many of which then had to be altered.