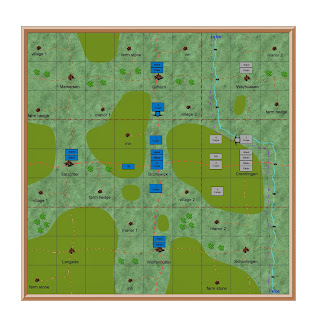 Blucher won the battle of Cremlingen, but it was a hollow victory.

He delayed the French attack, he did not defeat it.
Without cavalry, he had to keep his infantry behind the crest of the hill
His artillery were on the forward slope, and did damage to the advancing French.
But in doing so they also suffered heavy casualties.

Napoleon had not retreated.
He rallied his three corps at Brunswick, their start positions for the battle
All three corps were weak, but all were operational
His cavalry had minor battle casualties and could provide a security screen
But they were in urgent need of resupply.
3rd corps, who lost the battle of Weyhausen, was ordered to join them
They were out of supply, and would suffer attrition casualties
But to avoid retreat he had to concentrate all four corps at Brunswick.

Napoleon achieved the campaign objective, he took and held Brunswick
He did not crush the Prussian army, but he did fight it to a standstill
Posted by thistlebarrow at 11:54