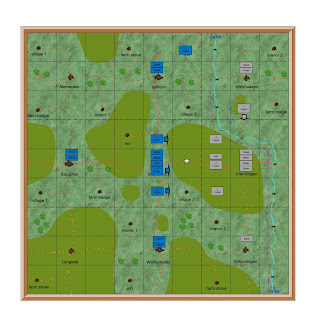 March 1813 – North Germany - Day 7
Napoleon’s defeat at Weyhausen presented him with a difficult decision.
He had won three of the four battles so far in this campaign
The Prussians had retreated to Cremlingen to make a final stand
It was a strong defensive position, but they had the river Elbe at their backs

Both armies were low on supplies and in urgent need of battle casualty replacements
It was worse for the French, who had advanced beyond their lines of supply

Both commanders had three corps available to fight
The French were stronger in cavalry, and they had the almost untouched Guard
Blucher had more infantry, and could hide them behind a long ridge

Much more important was 1st Prussian corps, who had won the battle of Weyhausen
They were marching south to join Blucher, and would arrive within 24 hours

So Napoleon must either attack and hope to crush Blucher before nightfall
Or halt at Brunswick and try to rally 3rd corps, who had lost at Weyhausen

Being Napoleon it was an easy decision – he would attack 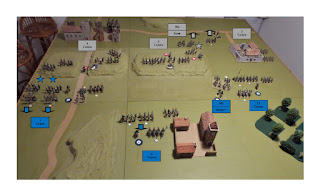 Move 9 – end of battle
Blucher occupied two hills, where he could deploy his infantry out of sight
His artillery were on the forward slope, and could fire on the French
But he had to plug a gap between the hills and an isolated fortified farm

Napoleon was stuck with the campaign deployment of his army
To delay one day to redeploy them would allow 1st Prussian corps to arrive
The Guard were on his left flank, faced with one of the two occupied hills
4th corps in the centre had a similar problem, but were much weaker than the Guard
13th corps on the right were also weak, but faced the vulnerable gap

13th corps would have to make the main attack.
To support them Napoleon established a grand battery with guns from 4th and 13th corps.

The attack went well, and the artillery broke the infantry between the hill and the farm
But Blucher brought up three reserve brigades from the town and plugged  the gap

It was all down to the Guard.   They were almost full strength.
One infantry brigade, and the cavalry, each had 10% casualties.
Their artillery moved into close range of the Prussian guns, but could not move them
The Prussian gunners concentrated on the approaching infantry
The infantry advanced with four brigades, two in front and two behind
The cavalry were behind the infantry and artillery
Just as they were about to attack the front right hand brigade was hit
They failed their morale and were shaken
The left hand brigade advanced up the hill
But the reserve infantry and cavalry could not get past the stalled brigade

The leading brigade was 1st Grenadiers, the only A class brigade
They faced a B class Prussian brigade
Because the Prussians were behind the crest they had to test their morale
They passed and stood to meet the French attack

Despite everything the French should have won this melee.
But the god of dice were against them
The first round of melee was a draw, 10% casualties on each side
They lost the second round, another 10% casualties and shaken
They then failed their morale, broke and ran
The stalled brigade beside them tested, and also failed, and also ran
Two brigades behind them stood their ground, but were disordered
The cavalry finally moved around the stalled infantry
They approached the artillery, suffered another 10% casualties, failed morale
The Prussian artillery poured fire at close range into the disordered mass

Napoleon ordered the Guard to retreat.

A great wargame.   I always like commanding the Imperial Garde.
Even with small 8 figure brigades they look impressive advancing in column
But sometimes it is more enjoyable to lose than to win
This was a real “waterloo moment”, and for me proved the value of our rules.

It may be the end of the campaign, but what a way to end.