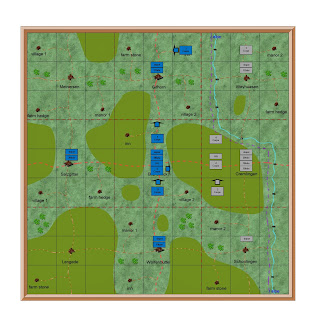 6 March 1813 – North Germany - Day 6
The Prussian victory at Weyhausen is a serious setback for Napoleon.
3rd French corps are forced to retreat back over the river Elbe
This will allow 1st Prussian corps to rally and regroup
Napoleon will then be unable to prevent them marching south to join Blucher

Both armies are badly damaged and urgently need reinforcements

Napoleon orders 3rd corps to rally at Gifhorn
This will take two days, and they will not be available to the looming battle
Nor will they be able to prevent 1st Prussian corps from joining Blucher

1st, 4th and 13th corps are all ordered to concentrate at Brunswick
In doing so they will not be able to resupply, regroup or receive reinforcements
But he is well aware that he must attack before the Prussians concentrate.

Napoleon does have the option of holding Brunswick and not attacking Cremlingen
But that would allow Blucher to concentrate four corps against the three French
Within three days he could face these odds and risk losing Brunswick.
Posted by thistlebarrow at 12:03