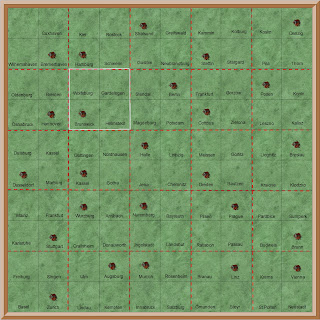 This map shows the proposed military regions in Germany.

Each square is a military district and a campaign phase, so there are a possible 99 such phases.   They are grouped together in sets of four, making a military region.  So there are 25 regions in Germany.

Each of these districts are nine wargame tables.

These will be dived into three campaign areas as at present.   North, Centre and South.   Each will have a French army fighting against either Prussian, Russian or Austrian armies.

The aim is to be able to run each of these three areas on the computer, to provide an oversight to the many campaign phases. 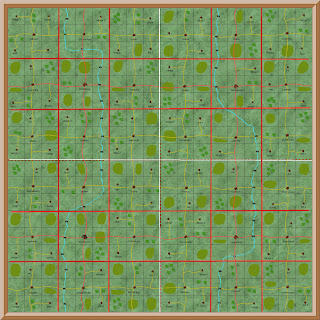 To play test this concept I produced a map showing all of the tables in the Brunswick Military Region.

The whole map is one Military Region.  The white lines show the four Military Districts in this region.

It is immediately obvious that there is just too much detail for one map.   The campaign is run on my desktop, and I can zoom in for all of the detail I need.  But it would not transfer to the Campaign Diary Blog.   Anyone wanting to follow the campaign on the blog would probably be using a mobile phone or tablet.  On either it would not be possible to grasp what is happening.

In addition because there is so much detail it would be difficult for me to coordinate the overall campaign.   Remember this is only one of 25 Regions in Germany.  And there will be a similar number in Spain.

Clearly this is not the answer.

Back to the drawing board.
Posted by thistlebarrow at 16:03