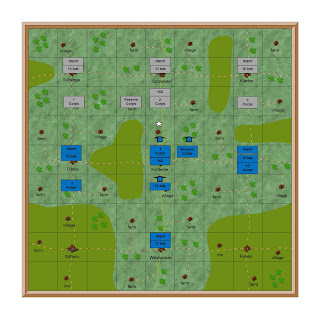 Campaign Map on 26 September 1813
Both armies are in urgent need of reorganisation, resupply and reinforcements.
Blucher orders his four corps to hold, resupply and regroup.

However Napoleon is determined to prevent the Prussians regrouping.
He orders 1st Guard corps and Reserve corps to attack Salzwedel
This is the main Prussian supply base and is defended by 2nd Prussian and reserve corps. 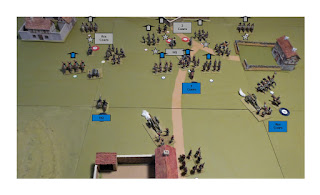 Battle of Salzwedel – end of move 6
All four corps have battle casualties, but the French less than the Prussians
However the French have to attack and win.
The Prussians have only to defend and hold Salzwedel

The French gunners were more effective, and caused more casualties
Their unopposed cavalry forced the enemy infantry into square
The infantry broke the Prussian centre and routed five brigades

Campaign Notes
This wargame would be decided by the luck of the dice.

The Prussian gunners fired 10 times, but only inflicted one casualty

The French guard infantry advanced in three columns
They received no casualties from enemy artillery or skirmish fire
The leading brigade routed the centre artillery battery
This caused the adjoining infantry brigades to test their morale, which they failed

Fortunately the fortified city of Salzwedel was directly behind them
The fleeing Prussian infantry and cavalry were able to find shelter in the city
The French have no siege artillery in this campaign.
Their field artillery is pretty ineffective against a fortified city
To attack without siege artillery would be ill advised.
The only option is a siege
The city has four days supplies.

The campaign is designed to provide good battles to wargame
A siege does not make for a good wargame
There are no rules for siege warfare, though they would not be difficult to write
But my preferred option would be to make the defenders fight to relieve the city
Hence the unrealistic four days supplies for a major city.