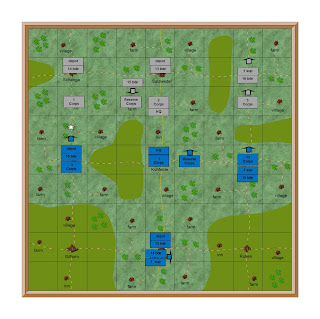 Campaign Map on 25 September 1813
After three battles, and two defeats, in three days the Prussian army is in urgent need of resupply and reorganisation.   Blucher orders them to concentrate at Salzwedel to carry out that regrouping.

The French army is also in some disorder.  However they have suffered less casualties than the Prussians and are more capable of further operations.   In addition Napoleon is determined to keep up the pressure on Blucher and prevent him from recovering from his recent defeats.

3rd French corps is best placed to carry on the offensive.   Two of their four infantry brigades each have 10% casualties, but their cavalry have 20% casualties 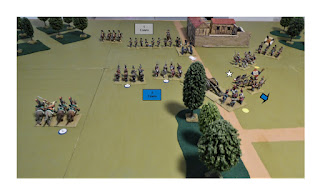 Battle of Schenga – end of move 5
The battle starts well for the French, but by move six they have been soundly beaten and are in retreat.

Campaign Notes
By this stage of the campaign both armies have fought and suffered casualties.   Given the opportunity to break contact and regroup, each corps can transfer infantry casualties to their weakest brigade.   But they must leave 10% casualties in the original brigade.    Each day they receive battle casualty replacements at the rate of 10% of a brigade to each corps.   The priority for these reinforcements is always gunners, cavalrymen and then infantry.

Even when a corps has received all of the battle replacements it is entitled to, those brigades which have suffered casualties will still have 10%.  This reduces their combat efficiency but even more importantly their morale.   Each will lose 1 on each dice throw to test morale.

This battle opened well for the French.   They has more, and better, infantry than the Prussians.   So their plan was to attack in two infantry columns.  Their cavalry was weaker than the Prussian, so they would support the infantry from behind.

At the end of move 4 (1200 noon) all four brigades were in position to attack.  All four would ignore the walled farm and Prussian infantry on the right.   They would concentrate on the artillery and single infantry brigade supporting them. They had already inflicted 10% casualties on this brigade.

The next move was critical.   The French infantry would have to move into close artillery range to attack the gunners and supporting infantry.   If the Prussians moved first, their artillery would have to fire at long range.

The French moved first.   The artillery fired and hit the infantry supporting the Prussian artillery.   They passed their morale test with a roll of 5.   The infantry moved forward and were now within charge move of the gunners and the supporting infantry.

The Prussians move second.   The commander must decide whether to withdraw his artillery from the infantry, or to fire at close range and hope to rout them.   He fired at point blank range on the nearest brigade and caused 10% casualties.  There was a good chance that this brigade could withstand these casualties, because they were B class and this was their first casualties.   They rolled a dice and got 1, they lost their morale and routed.   The infantry brigade on their right tested their morale for the rout, rolled 2 and were shaken.   The gunners on their left also tested their morale, rolled 1 and were also shaken.

Brigades which are shaken cannot fire or fight.  They must pass a morale test before they can do so.   The French right flank was paralysed.   The two brigades on their left flank each had 10% casualties and could not attack on their own.  The French must retreat immediately.

But to do so they must move first on 6

The French moved second
Two brigades were already in rout, the gunners were shaken
The French commander ordered a general retreat
The broken corps retreated in some disorder, covered by their weak cavalry brigade.

This was a very good example of how fragile a corps can become in the later stages of a campaign phase.   Even though the enemy may have more casualties, the first brigade to test morale can easily cause havoc.   In these circumstances it becomes of critical importance which side moves first.

I played the French commander in this game, and Jan the Prussian commander.   Although I was soundly beaten, and largely due to a run of very poor dice, I really enjoyed the game.   And a Prussian victory at this stage was good for the campaign, as it would allow Blucher a little breathing space to regroup.