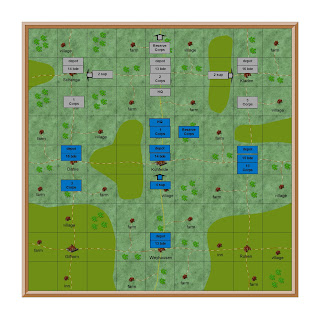 There are sufficient stocks to resupply both armies, but they are in the wrong place
Due to corps constantly moving, only the main corps have sufficient supplies

Blucher orders redistribution of supplies from Salzwedel to Schenga and Kladen

Campaign Notes
The campaign supply rules are really very simple
But they are also very effective.

Each army always has a minimum of 20 days supplies
This is four days per corps and four days in reserve
This is the combined total of supplies with corps and in all depots
If the army falls below, the balance is delivered to the main depot

Each depot receives one days supplies for one corps each campaign day
A depot much have a full strength infantry brigade as a garrison
It takes a brigade one full day to establish a depot
Up to four days supplies can be moved between depots each day
They can move a maximum of three squares per day.

Each corps can carry a maximum of four days supplies

For at least three days there is no problem, whatever the army does
But unless they receive supplies each day, they will start to run low
This is particularly so when there is a lot of movement and fighting

Often a commander will have to decide whether to continue to advance
Or to stop and resupply, or perhaps move his supplies around
Posted by thistlebarrow at 12:32