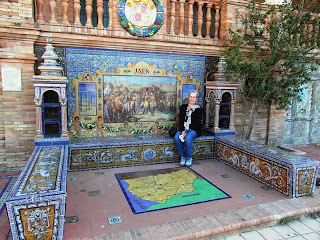 We spent most of last week on a coach trip to Cordoba and Seville, so not much time for things Wargaming.

We live in a small village near the town of Denia on the Costa Blanca.  This was our third visit to Andalusia, and the 426 mile road journey to Seville made me realise what a large country Spain is – at least for those of us from the UK.   I suspect that is no great distance to readers in the USA.

It took us 11 hours in our comfortable air conditioned coach.   A long journey, but it pales into insignificance when you consider how long it would have taken a French infantryman during the Peninsular War.

I would guess that 18 miles a day in the heat and poor road conditions would have been pretty good going.   At that rate it would have taken 28 days to march from Denia to Seville.

From Cordoba to Seville is 85 miles by road, so our foot weary infantryman would have taken almost 6 days.

It was our first visit to Cordoba, and our second to Seville.   So we were aware that there is not a lot of Napoleonic interest in either city.  Or if there is it is not very easy to find.   The guides concentrate on the Moorish invasion in 711, and the final victory of the Christian King Ferdinand in 1236.

The only item of Napoleonic interest was found in the impressive Plaza de Espana in Seville.   The square was built as part of the Exposition of 1929.   Around the square are tiled “Province Alcoves” for each of the Provinces of Spain.   Our favourite was Jaen, which had the Battle of Baylen as its showpiece.

Both are beautiful cities, and both are very well worth a visit – even without any obvious monuments to the Peninsular War.
Posted by thistlebarrow at 15:07