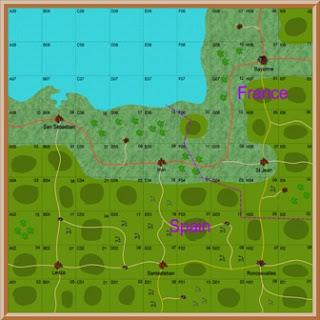 I have a vacancy in my PBEM campaign for the role of Marshal Soult.

The Fifth French Army has the role of containing Wellington and his Anglo-Portuguese-Spanish army in the western Pyrenees.

For the next phase of the campaign he has concentrated five Armee Corps along the French border with Spain.   He orders are to invade Spain and take Wellington’s supply base at San Sebastian.   At the same time he will have to protect his long lines of communication from his base at Bayonne.

This is a fictional campaign designed to provide interesting and fun wargames, which will be fought by my wife and I.    The player will be responsible for all aspects of the map campaign; we will take over when a battle is declared.

The aim is to play one campaign day each week.   Each player is required to write orders to each of his five corps commanders once per week.  This task should take no more than half an hour.   The campaign rules consist of five A4 size pages, and are for reference only.

No previous experience is necessary.  There is no need to learn complicated rules.

You can find more information on the campaign diary blog which you will find here
http://1814campaigndiary.blogspot.com.es/