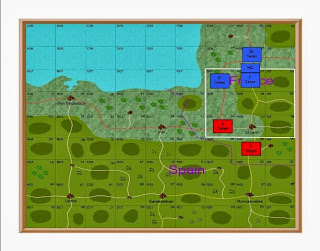 I have been unable to use my desktop computer all week due to a virus.   All of the campaign files are on the desktop, so it has made it difficult to keep the campaign administration up to date.

To keep me occupied I redesigned the campaign diary blog.

The blog contains a record of the PBEM campaign, including battle reports and a daily diary.   I have to be careful not to give away too much current information on the diary, and consequently it does not serve very well as a history of the campaign.

I decided that I would produce new maps which were similar to the campaign tactical maps, but which did not have as much detail or the grid. 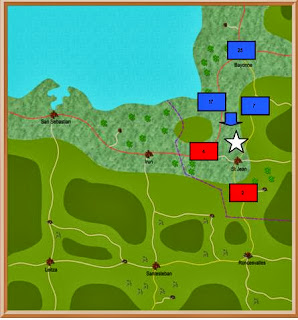 The entry for each day has six maps, one for each of the campaign areas, with a very brief summary of what has happened on that particular day.

The blog has an index, based on the labels.   To read a daily history of the campaign you need only click on Label 03 Campaign Diary for the current one.  To read them all you click Older Posts bottom right until you get to 1st March 1814.

The problem is that we have already completed ten campaign days, so I had to do quite a lot of research, make six maps and update each of them ten times.   It has taken all week.   Not sure how much it will be used by the players, but it will be very useful for me as a reference.

If you would like to see the campaign diary blog you will find it here
http://1814campaigndiary.blogspot.com.es/