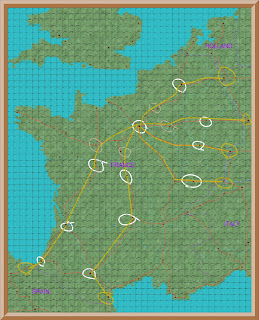 The planning for the next campaign is going well, despite constant changes in plan.

My first plan was a fictional 1812 campaign, based on the Austrians and Prussians joining with the Russians to prevent Napoleons invasion of Russia by attacking France in January 1812.   I did a lot of work on maps and orders of battle before deciding to abandon the project.

The link works well.   Napoleon has suffered more defeats in my fictional 1813 campaign than victories.   He has lost both Hannover and Gera in the mini PBEM campaigns.   So it is not unreasonable for him to call an armistice in late 1813 to allow him to build up his armies.   The allies demand that he retreat to the river Rhine before they accept a cease fire.   That is the background for the 1814 campaign.

The big job is to make new maps, in particular a new map of all of France.

My first draft of the map is above, and shows my initial thoughts on the proposed campaign.

There will be six armies on each side, so the orders of battle will be another big job.

It’s a very ambitious campaign, much larger than any of my previous ones.

Each player will be an army commander and will command four corps.   There will be twelve command posts, which is a lot of players to find.

As the planning progresses I will post updates on the forum and put documents and maps in the files section
Posted by thistlebarrow at 10:06