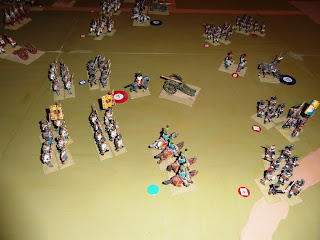 Six French/Baden infantry brigades break and run as the 7th Austrian division advance.   The routs are marked by the red markers, which also show the number of casualties.   The Austrians have suffered 20% casualties on the jager brigade, who have however made their morale.

The Linz PBEM campaign is providing its fair share of battles/wargames.

It is only 10 campaign days old and already has produced nine battles, well above the average for one of the campaign phases.   This is partly due to the campaign map, which was designed to produce more battles.   But it also owes a lot the “gung ho” attitude of the corps commanders.

Right from the start most appear to have worked on the principle “if in doubt – attack”.  This provides lots of battles.   It can also provide very brittle formations.

In our wargame rules each battle casualty resulted in 10% casualties to the brigade concerned.  To anyone who does not understand the rules, this may not seem very drastic.   However each casualty results in a minus on morale and combat tables.   So even one “hit” will reduce the effectiveness of the brigade.

At the end of the battle each division will receive casualty replacements providing that they are not in contact with the enemy and do not move.  These replacements are the same as one cavalry or artillery hit, or two infantry hits.   The corps commander is notified in the daily umpire report how many replacements each division has received, but he has to confirm which brigade he wants them to go to.   Surprisingly more than one player has failed to do so.   He gets another reminder next umpire report, but if he has to fight a battle the next day the division will do so without the replacements.

In addition it is possible to concentrate all infantry casualties in one brigade in each division.   Despite a reminder of this rule on the forum, most players have failed to do so.   Most casualties are spread between brigades, and failure to concentrate them means that all such brigades will be affected.

For example four brigades with one casualty, or 10% casualties, will all suffer a reduction on morale or combat tests.   But were all four casualties, or 40% casualties, concentrated in one brigade this would greatly increase the morale and combat effectiveness of the division.   One brigade would be non operational, but the remaining three would be normal.

In our most recent wargame this has happened.

Four infantry brigades in one division started with either 10% or 20% casualties.   All went well until one of them received artillery casualties.   They immediately failed their morale, broke and routed.   All brigades within 4” have to test for the rout, all failed and also broke and ran.   The rout spread across two divisions and the whole French attack broke down.

The nine battles which the campaign has produced so far have proved an interesting and varied lot.   Not a single one was of “line both armies up on the side of the table and charge each other” type.   Each table is laid out from the campaign map.   The armies start in the order of march decided by the player, and with his declared reaction on meeting with the enemy.   This is often changed immediately by Jan or I, but that in itself imposes a delay and allows the opponent time to react.   It is not unusual for one side to spend 8 of the 12 moves in a game/campaign day just marching towards the enemy.

Often the two divisions of the corps will be out of supporting distance of each other.   The leading one may have orders to attack the two enemy divisions on the table, whilst the supporting division may not arrive until the start of move 5, or even move 9.

It all adds to our enjoyment of the resulting wargame.   Neither of us mind much who wins and who comes second.   The only disappointment is when a game is decided by too strong a run of good, or bad, dice.   An element of surprise adds a lot to a game, but a long run of bad luck spoils it for both of us.

On balance no complaints at all.  We have enjoyed all nine wargames, even the two where the outcome was obvious from the start.  I refer to the two games where a player insisted on fighting at odds of two to one.   The game can be enjoyable given the luck of the dice, even though the end result is never in doubt.

I suspect the campaign will not run for much longer, but it is already one of the more memorable.
Posted by thistlebarrow at 20:28